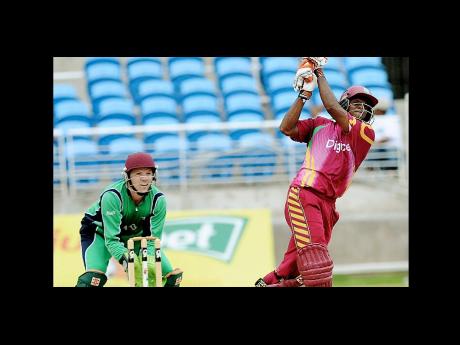 West Indies batsman Shivnarine Chanderpaul hitting out of the ground during his run-a-ball 64 in the Supreme Ventures Sports Betting Jamaica Cricket Festival Twenty20 match at Sabina Park yesterday. The two teams will meet again today at the same venue. The wicketkeeper is Niall O'Brien. - Ian Allen/Photographer

A no-nonsense Shivnarine Chander-paul led the West Indies to yet another victory in the Supreme Ventures Sports Betting Jamaica Cricket Festival at Sabina Park yesterday.

The Caribbean side ran out 18-run victors in their Twenty20 contest against Ireland. Chanderpaul struck the ball all over the park in his entertaining knock of 64 that featured eight fours and two sixes in 64 balls which powered the West Indies to 171-7 in their 20 overs.

In their reply, Ireland could only manage 153-7 as the West Indies secured yet another victory in the pre-ICC World Twenty20 Championship series.

After a tame start from the regional team, Chanderpaul took the initiative and applied relentless pressure to the Irish bowlers before he went for one shot too many and was caught by John Mooney in the midwicket region off the bowling of Gary Kidd with the last ball of the 14th over. His opening partner, André Fletcher, didn't last long as he was removed in the sixth over, Mooney once again pouching the catch, this time off the bowling of Peter Connell.

Wavell Hinds looked good for his 45 which came from 29 balls (three fours and two sixes) but there were no other meaningful contributions by the other regional batsmen as the Windies lost their last four wickets for a mere 33 runs.

Alex Cusack was the pick of the bowlers, closing with figures of 3-19 off three overs, while Connell took 1-20 and Kidd 1-26.

The visitors wasted little time as they signalled their intent from the very first over with captain William Porterfield and Paul Stirling leading the charge. The Irish were scoring 10 runs an over in their first four overs and were threatening to steal an upset, even at that early stage.

Niall O'Brien was a constant threat for the Irish as he punished the West Indies bowlers with a bruising 62 off 44 balls to push the visitors within reach of the Windies tally.

They were pushed back, however, by pacer Lionel Baker who removed Porterfield for 17, caught behind by wicketkeeper Denesh Ramdin off the first ball of his opening over.

Stirling (33) was next to go, brilliantly run out by Chanderpaul, who was fielding in the backward point position.

Chanderpaul was pleased with his innings and was happy with the result as the team continues its preparation for the ICC World Twenty20 Championships which gets under way in the region April 30-May 16. "It was a great game, both sides played well. We lost Fletcher early but Wavell (Hinds) came and really batted well and it all finished up nicely for us. We lost too many wickets in the end and could have made some more runs ...," Chanderpaul said. "We have been playing well and preparing well. Winning is good for us and is good for our confidence," he added.

Irish captain, Porterfield, was disappointed having fallen short of the target, but was heartened by the effort being shown by his team.

"We played pretty well and it was an improved performance in certain areas. We got off to a very good start but that run out really changed the game for us and we kept losing wickets at bad points," said Porterfield.

The festival ends today with another Twenty20 match between the West Indies and Ireland starting at 1 p.m.