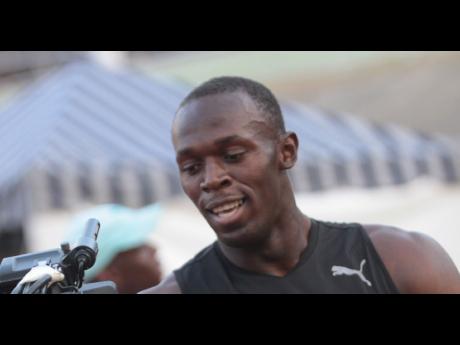 Olympic and World 100-metres and 200-metres champion and double world-record holder, Usain Bolt, was left stranded on the anchor leg during last night's third staging of the University of Technology's (UTech) Track and Field Classic at the National Stadium.

Four meet-records were broken during the early stages of the meet, as fans who were surprised to see the sprinting ace getting ready at the top of the 100m stretch before the start of the sprint relay, were left disappointed as the 23-year-old never got a chance to run.

Bolt, who up to late Friday evening was not confirmed to attend the meet, did not receive the baton from his Racers Track Club teammates after Mario Forsythe and Yohan Blake failed to execute the first exchange.

Moments later, rain triggered a mass exodus to the grandstand section as patrons sought shelter from the downpour. This resulted in a 20-minute break in the activities.

World 100m hurdles champion Brigitte Foster-Hylton went crashing to the track in the women's 100m as she lost her footing after apparently picking up an injury midway the race. The event was won by her MVP club mate Sherone Simpson in 11.58 seconds. Racers' Schillonie Calvert, 11.90, was second with MVP's Ayanna Hutchinson third in 12.12.

Olympic and World 400m hurdles champion Melaine Walker, 52.84, had to settle for second place in the flat one-lap event behind UTech's Stephanie McPherson who won in 52.48.

Wolmer's came out on top in the High school boys' 4x100m relay time final, clocking a swift 40.55 seconds to claim the event in a new meet record. Calabar were second in 40.79 while St Elizabeth Technical rounded out the medal spots with a 40.81 clocking.