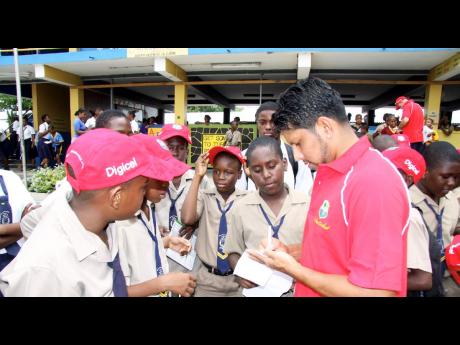 Students of Mico Practising Primary and Junior High school got a close-up view of four international cricketers when members of the West Indies and Ireland cricket teams visited the school on Friday, ahead of their Supreme Ventures Sports Betting Twenty20 clash at Sabina Park yesterday.

The visit, which was organised by West Indies team sponsors Digicel in association with the Jamaica Cricket Association, saw senior West Indies batsmen Shivnarine Chanderpaul and Ramnaresh Sarwan, and Ireland's vice-captain Trent Johnston and Niall O'Brien delivering motivational speeches, along with demonstrating a few rudiments of the game.

"I didn't expect such a big turn-out. I was excited to be there. Hopefully, Digicel will continue to do these things where we can inspire youngsters, and help them to believe in themselves more," said Sarwan who, like Chanderpaul, was a hit with youngsters.

During the visit to the school, the players participated in several sessions, including autograph-signing and giveaways.

"It really means a lot, as they were able to demonstrate to us the skills of the game when they could have been somewhere else doing something else," said a sixth-grader at the school, Oshane Daley, who received a cap full of signatures.

"It has helped to motivate me to do better at what I want to do," he added.

The visit, according Digicel's sports sponsorship manager, Paula Pinnock-McLeod, forms part of her company's overall commitment to give back to communities, especially in the area of sports.

"We were approached by the Jamaica Cricket Association to come on board regarding the festival, and as chief stakeholders in West Indies cricket we didn't hesitate," she said.

"We know how important cricket and cricketers are to the country and people of the region, and along with the Irish players, it was a nice cultural exchange," she added.

The school's principal, Lennox James Peart, said he was delighted at the visit.

"The students got a chance to see the players face to face and interact with them. It wasn't a TV or Sabina Park thing. It was a personal thing, and I think it formed a lasting impression on the children," he said.

The West Indies and Ireland are both preparing for the upcoming ICC World Twenty20 championship, which will be held here in the Caribbean later this month.