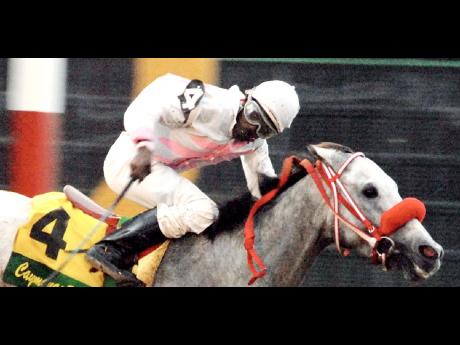 The guv, running at odds of 9-5, is hard driven by jockey Paul Francis to win yesterday's feature race for the Fontainbleu Trophy in a close finish at Caymanas Park yesterday. - File

Coming through on the rails a furlong out, THE GUV withstood a strong challenge from highly fancied HEART OF GOLD to win the 3-y-o-and-up open allowance feature for the Fontainbleu Trophy over 1500 metres at Caymanas Park yesterday.

Running as the 9-5 second-favourite with Paul 'Country' Francis riding for in-form trainer Spencer Chung, THE GUV, who has shown vast improvement this season, held on grimly by a neck to complete a hat-trick of wins.

Restrained just off the early pace in third as the 9-5 marginal favourite SHANGHAI PASS and 2007 Derby winner THE BOMBER (7-2) disputed the lead in the backstretch, THE GUV got the inside run to straighten close up in fourth on the rails.

At this stage, SHANGHAI PASS had moved ahead of THE BOMBER. But with HEART OF GOLD (5-2), the mount of champion jockey Omar Walker looming large on the outside after racing prominently into the straight and THE GUV cooking on the inside rails, the stage was set for a close finish.

In the end, THE GUV, responding to some torrid right-hand whipping, quickened to lead a furlong out, holding the Wayne DaCosta-trained HEART OF GOLD at bay in a driving finish, with SHANGHAI PASS third. COLEMAN'S ROCK was declared a late non-starter, reducing the field to seven.

A four-year-old grey colt by Royal Minister out of Havasac, THE GUV is owned by HSV and bred by Stephen and Val Chung along with Howard Hamilton. He has now won four of his five races this season.

"I really wanted to win this race for sentimental reasons," said Chung who was posting his eighth winner from 16 runners so far this season. He conceded: "It was a very competitive affair, but Francis rode a copybook race to save ground on the inside and I'm pleased with the outcome, even though it was close."

Francis, meanwhile, rode two winners on the nine-race programme in THE GUV and 3-2 favourite BIG BARGAIN in the fourth race over 1100 metres to push his season's tally to 24. This puts him joint second with hot apprentice Aaron Chatrie, who managed a win aboard 6-5 favourite PRINCE ROHAN in the sixth race over 1700 metres for maiden three-year-olds.

Both riders are 11 adrift of runaway leader Omar Walker (35 wins) in the jockeys' standings, but the reigning champion jockey was granted no favours yesterday, as he failed to ride a winner.

The card produced five winning favourites in the Carl Anderson-owned, trained and bred 4-y-o debutante AWESOME MARQUE (1-2), a son of the 2001 Guneas, Oaks and Derby winner AWESOME POWER, in the second race, as well as BIG BARGAIN, PRINCE ROHAN along with OASIS and DANCING SAM, both at 2-1.