Another look at wutless man 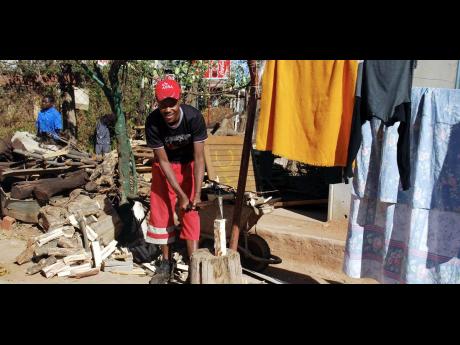 Chopping wood is still done by men around the world. - FILE

Some events have a way of separating the men from the boys. I had strong examples of solid manhood while growing up: father, grandfather and uncles who looked after their home and hearth, and headed the households as real men should. No "maah-maah-man" business.

As a result, I have set the bar very high and I don't take foolishness from the opposite sex. I will spoil a man rotten, but he has to deserve it. I respect him, but it has to be mutual, and when it comes to the home, my man must do the 'heavy lifting'.

So, can you imagine my horror what my two young neighbours (both over 25), came to me for help to find solutions to the water crisis. And, they are the same ones who will lie in bed during a much-needed shower of rain and not even put a bucket outside to catch some water!

But what took the cake was when, a couple weeks ago, one of them lay on his sofa and watched as a thief took away some valuable pieces of equipment from the front yard. He did not scream or bawl out, "thief". No alarm was raised. He was behind the safety of burglar bars and just watched as the drama unfolded. He said later that he could not bother to do anything about it.

I am sorry for the woman who becomes wife to such a helpless man. Society is bemoaning the fact that men are falling through the cracks and not being as responsible as they ought to be. I still think too many women are raising boys when it is a fact that young boys need strong male influences at home, in schools and churches and out in the world, to provide them with the valuable 'man lessons' they need. Too much sissy tendencies around.

Boys need to learn survival skills. They need to put down the hand-held gadgets, leave the air-conditioned SUVs and learn to fish, tether an animal, make some simple knots, clean their shoes, wash/iron their clothes, wash the car, cook the foods they like to eat, row a boat, chop some wood to make a camp or cooking fire, open doors for women, erect a tent, mow the lawn, do minor repairs around the house, make a slingshot, fly a kite, plant anything, kill something for food (a pig, chicken or goat), and a number of other manly activities.

Most of all, real men know how to defend the home!