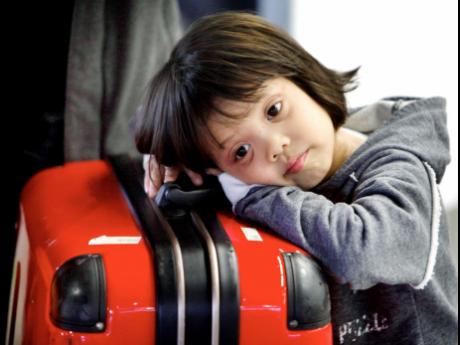 A girl rests on her suitcase in a terminal at Germany's largest airport, in Frankfurt, Sunday. The airport was closed because of volcanic ash streaming from Eyjafjallajokull glacier on Iceland. - AP 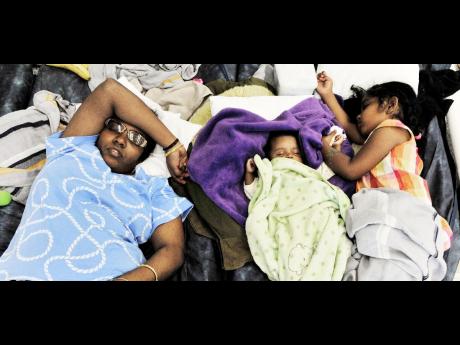 An Indian mother and her children rest in the transit area of the Frankfurt airport following the cancellation of all flights yesterday. - AP
1
2

SOME BRITISH Airways passengers stranded in Jamaica because of the volcanic ash choking European skies might be forced to remain in the island until May 1 or when seats become available.

Passengers have been rebooking and some have been given dates for as early as this Wednesday but, at the same time, there are flights scheduled to leave Jamaica for the United Kingdom that are currently showing full.

Information gathered by The Gleaner suggests that flights from both the Sangster and Norman Manley international airports into the UK and Germany might resume as early as tomorrow, once the airports reopen.

"I have been coming to the airport since last Thursday and British (Airways) told me that I may leave by the 28th of April, but from all indications, I could be here until May 1," Wayne Jarrett, a British soldier, told The Gleaner.

Jarrett, who has spent the last three weeks here vacationing, is trying to get back to the UK to do an operation to remove haemorrhoids that flared up last week. He said he underwent a minor operation at the Cornwall Regional Hospital last week and was booked to be admitted to the May Day Hospital in London on his return.

"I have been in a lot of pain and discomfort, but I can't do the operation here because the hospitals and the medical practitioners will not accept my travel insurance."

He said he was quoted a cost of J$150,000, which is comfortably covered by his £5,000 insurance coverage, but was told he could not use it here.

Jarrett believes passengers should be automatically rebooked on the next available flight.

When The Gleaner called the number, the automated system said it was difficult for the airline to deal with the number of calls it was receiving and persons were advised to go to www.ba.com to get updates and rebook.

"We did provide protection (accommodation) for visitors stranded across the region for their first night's stay in various hotels," Erskine said.

In the meantime, Tourism Minister Edmund Bartlett said the fallout in visitor arrivals from Europe could be as steep as three per cent for the month of April.

"But we anticipate that some of it could back-end towards the end of the month," he added optimistically.

He said this would mean that instead of seeing an increase of between seven and eight per cent in arrivals for April over the corresponding period last year, that number could be reduced to about five or six per cent.

Overall, he believes the country could make up for the arrival haemorrhage, particularly with the opening of the second Secrets Resort hotel on April 24.