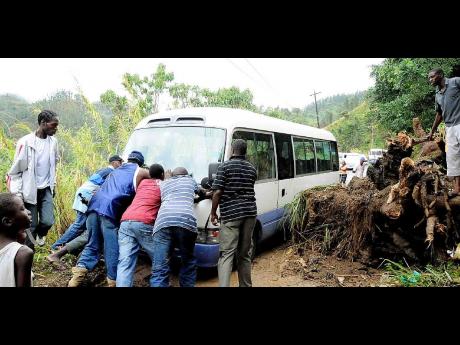 Residents push a bus that was stuck in mud from a landslide along the Guava Ridge to Mavis Bank main road in rural St Andrew. - Ian Allen/Photographer

Flooding and road slippages were reported in St Thomas and some hilly areas of St Andrew as an area of active weather dumped more rain over eastern Jamaica yesterday.

The main road between Port Morant and Golden Grove, near Bowden Crossing, was flooded for several hours, but by early afternoon the water had subsided.

The police in Mavis Bank, St Andrew, confirmed that a bus carrying a group of schoolchildren was stuck overnight Saturday after a section of the road near Craig Hill gave way.

The Constabulary Communication Network also reported that a section of the road near the St Andrew-St Mary border was blocked for several hours by debris caused by land slippage.

In a statement late yesterday, the Meteorological Service said the area of active weather has weakened to the east of the island but would produce more showers over sections of St Catherine, Kingston and St Andrew, St Mary, Portland and St Thomas into today.

The Meteorological Service also announced that it had downgraded the flash-flood warning to a flash-flood watch for low-lying and flood-prone areas in all six parishes until 5 a.m. today.

Fishermen and other marine interests have been warned to exercise caution, as gusty winds and rough seas are likely.

A flash-flood watch means that flash flooding is possible and residents are advised to take precautionary measures, keep informed by listening to further releases from the Meteorological Service and be ready for quick action if flooding is observed or if a warning is issued.