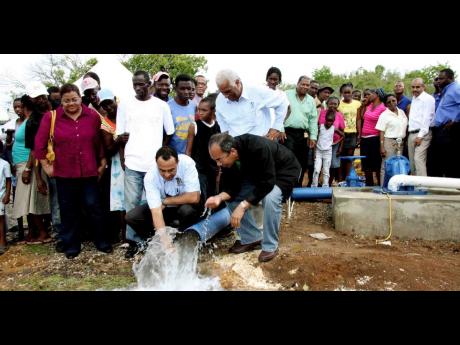 Approximately 2,500 residents across 15 communities in southwest St Elizabeth now have potable water running in their taps, breaking more than a decade of chronic supply problems.

The relief, which will be even more critical considering the months-long drought affecting the island, came last Friday when Dr Horace Chang, the water and housing minister, and other government officials commissioned into service the Parottee Water Supply System in Hopewell, St Elizabeth.

"We are spending $53 million on the water system, as well as to upgrade the electricity to have it perform at its peak," said Chang.

He added that the system, which is operated via a generator, would for now operate for eight hours daily, but emphasised that it would be up to full capacity as soon as it was powered by the Jamaica Public Service Company, a development which could occur in three to four weeks.

Hailing the move as a major achievement, councillor for the Mountainside division, Derrick Sangster, said the system would serve residents of Greenfield, Pondside, Fort Charles, Stonefield, Cherry Gardens and Barbary Hall, among others.

Sangster said it would also fill a large reservoir located at Hill Top, which will then gravity-feed into the Parottee zone, thus supplementing the existing system, which is 30 per cent functional.

Marjorie Thyme, a farmer of Fort Charles, recalled the many confrontations residents had with Sangster when they were forced to live without piped water.

"We called him often and sometimes he would get angry with us. Now we are very happy. My crops can now get water," she said.

Percel Foster, a resident of Greenfield, was equally appreciative.

"Before this system came on stream, it was very tough. People could not get water and had to buy it. This system will help all in the community very much," said Foster.

Chang emphasised that the Parottee system was pushed through after several attempts were made to drill alternative wells, costing more than $30 million. However, the yield from those wells proved inadequate and unsustainable.