A new day for Sadekia Dixon 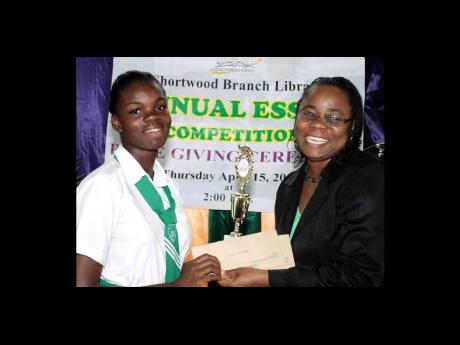 The tried and true maxim of 'hard work, dedication and commitment' was the critical ingredient credited with earning Sadekia Dixon top honours in Shortwood Branch Library's annual essay competition ahead of 23 other contenders.

The New Day Primary and Junior High School student, who was elated at her win, said although the task of assessing the global economic crisis was challenging, she was determined to face the gauntlet.

"I was prepared to put myself to the test because I wanted to end up being victorious," she told The Gleaner immediately after the prize-giving at the Shortwood Branch Library in northeast St Andrew last Thursday afternoon.

The essay centred on the impact of the worldwide recession on Jamaica.

"Even though I was in a little doubt when I thought about the persons I was going up against, I told myself that I was going to try my best and hoped my best would be good enough," Sadekia said.

She copped the title ahead of first runner-up Stephanie Bernard, and Mike Hylton who placed third.

Sadekia said the essay competition had improved her writing skills and sharpened her ability to work under pressure.

"I had to work hard to meet the deadline, but it doesn't matter because I enjoyed it," said the 15-year-old.

Sadekia, an aspiring doctor or educator, is not buried in books, as she also has hopes of becoming a shining star in athletics.

"I love sports and I know I will do well in athletics as well," she said.

The winning essayist's language arts teacher, Marvia Rose-Williams, said Sadekia was a top student in her class and was always motivated to learn.

"I knew she could have done it because she has always done well in class," Rose-Williams said.

The competition, which is in its second year, aims developing students' writing skills and inspiring them to be high achievers.