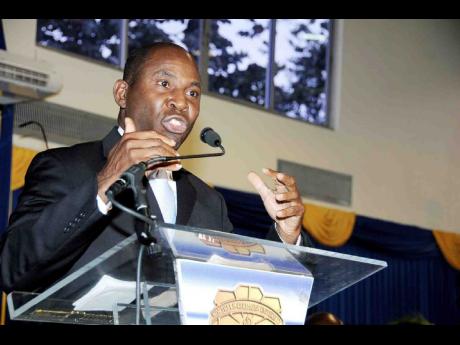 A PROMINENT local pastor has urged political leaders to garner the will to destroy garrisons and trouble spots in Jamaica.

The call came on Saturday from Pastor Glen Samuels, secretary of the West Indies Union Conference of Seventh-day Adventists, as he addressed the 10th annual prayer and thanksgiving service for members of the security forces of Jamaica at Northern Caribbean University (NCU).

"It is true that we have challenges with financial resources, but this country is a big country," said Samuels. "The trouble spots in Jamaica are not many. The unplanned communities that make it difficult for effective policing are not many, but what a wonderful thing it would be if there would be the political and national will to say, 'We are going to remodel these communities with good homes and roads and demolish these hideouts so that effective policing can be possible'."

He added: "We need to find the will to save this country from itself or all of us will be buried together."

Samuels also used the opportunity to remind members of the Island Special Constabulary Force to shun corrupt practices that have tarnished both the force and the country.

"Your integrity must have no price tag," he exclaimed. "I want you to know that good pay or no pay, integrity must not be merchandised on the altar of expediency.

"This country is in need of men of noble intellect and character - men and women who would wear their uniform knowing that it is the person who wears them that will cause the uniform and its wearer to be respected."

During the service, 13 members of the Jamaica Constabulary Force who lost their lives since the last service was held in April 2009 were remembered by the laying of a flower by each of 13 of their former colleagues.

A special award was presented by NCU to retired Superintendent of Police Franklyn Mitchell for his service to Jamaica and specifically the people of Area Three (Clarendon, St Elizabeth, and Manchester).

Offertory was collected to fund the establishment of a scholarship fund for security personnel who pursue studies at NCU.