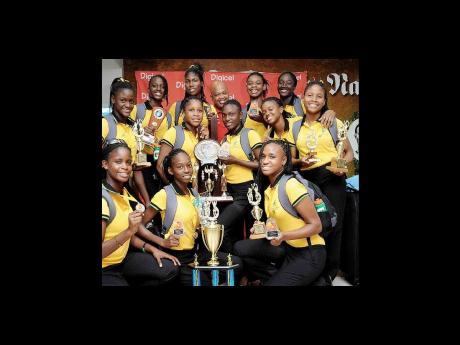 Jamaica's under-16 netballers pose with their trophies upon arrival at the Norman Manley International after successfully defending their title at the Jean Pierre Caribbean Netball Championship. - Ian Allen/Photographer

True to form, Jamaica remained unbeaten as they successfully retained their Jean Pierre Memorial Caribbean Under-16 title with a 35-19 victory over hosts Barbados on Saturday at the National Netball Stadium.

The second half of the match was literally a no-contest, as the Jamaicans successfully shut down the Barbadian offence, after taking a 13-11 lead into the half-time break.

It was the fourth straight title for the Jamaicans and an emotional Jamaica captain Vanessa Jones was close to tears of joy following the result.

"Coming into the game we were really determined and we said that we were going to leave it all on the court," she said.

"It was an all-out team effort. We put in a lot of training. We were very determined and I am just thanking God for the win."

The match remained competitive throughout the early exchanges in the third period, but the Jamaicans netted eight unanswered goals to lead 26-16 at the break.

On resumption, the Jamaicans scenting victory, defended vigorously and transformed turnovers into goals to rush to a 32-16 lead to seal the fate of the hosts.

It was the second straight year the Jamaicans had stopped Barbados to win the Under-16 title.

"First quarter we started to take the lead," said Jones. "Second quarter we got a bit anxious then my coach introduced me at half-time and I made up my mind and decided I had to go out there and do my best.

"It did make a big difference. When I saw the 10-point lead I said to myself there was no way they could catch us again. Then we just slowed it down and came out and completed the job in the last quarter."

Barbados assistant coach, Denise Alleyne, felt her side had improved and the gap between her team and Jamaica was closing.

Last year, Barbados were beaten 54-19 in the championship game.

"In the early stages of the game I thought that the game would go on to be an evenly-contested one," she told the local Sunday Sun newspaper.

"We made some unforced errors, Jamaica capitalised on them and they came out on top. Overall, I thought the girls showed a lot of character, they fought really hard and I am really proud of them."

Chemyne Alleyne led Barbados with 11 from 16 and Shannon Hackett netted eight from 10.

In the development segment, Cayman Islands edged St. Kitts 19-18, after trailing 9-10 at the halfway stage; and Bermuda dominated Guyana 30-19.