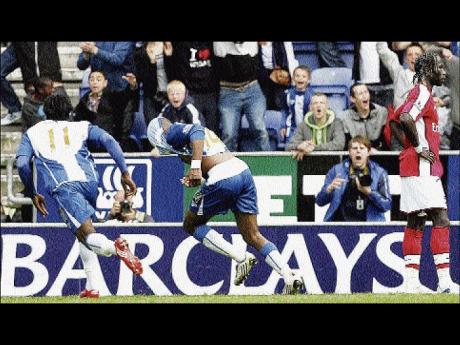 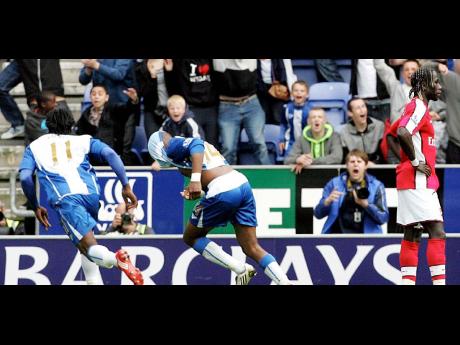 Arsenal conceded three goals in the last 10 minutes yesterday to lose 3-2 at Wigan and surrender their faint hopes of winning the English Premier League title.

The Gunners were winning 2-0 and on course to rebound from Wednesday's 2-1 defeat at Tottenham, until midfielder Ben Watson scored in the 80th minute for Wigan.

Titus Bramble then equalised in the 89th, following a fumble by goalkeeper Lukasz Fabianski, and the brittle Arsenal defence gave Charles N'Zogbia space in injury time to run across the edge of the box and hit a curling shot in at the far post.

"I believe we were not focused, not disciplined and were caught," Arsenal manager Arsene Wenger said. "In football, you have to stay focused for 90 minutes otherwise you run the risk of being punished.

"That is especially the case against a team with nothing to lose, fighting not to go down. You knew they would not give up and in the end we were punished for that."

Wigan's first league win over Arsenal lifted them seven points clear of the relegation zone and left the Gunners six points behind leaders Chelsea with three games to play.

Arsenal now need to win their last three games by big margins and hope Chelsea and United each win no more than one of their remaining matches.

Tottenham's 2-1 victory over Chelsea had reignited Arsenal's faint title chances and the Gunners looked set to capitalise after Theo Walcott put them ahead in the 41st minute.

The England winger evaded Bramble and Maynor Figueroa, before slipping the ball underneath goalkeeper Chris Kirkland for his seventh goal of the season.

Walcott shot over the bar just before half-time, but three minutes after the break, Mikael Silvestre headed in unmarked from Samir Nasri's free kick to double Arsenal's lead.

Watson, who was on loan at second-tier clubs Queens Park Rangers and West Bromwich Albion earlier this season, got a goal back with a side-footed shot from 12 yards, before Fabianski handed Wigan the equaliser.

He caught and then dropped N'Zogbia's corner to give Bramble a free header, which crossed the line before defender Gael Clichy could clear it.

N'Zogbia then scored from 20 yards as Wigan followed this season's first-ever wins over Liverpool and Chelsea with victory over the Gunners.

American goalkeeper Brad Friedel preserved Villa's win with an instinctive close-range save from substitute Joel Ward, sticking out his right hand to keep out the ball.

Villa moved up to sixth place, although they will drop back down to seventh today if Liverpool beat relegation-threatened West Ham.