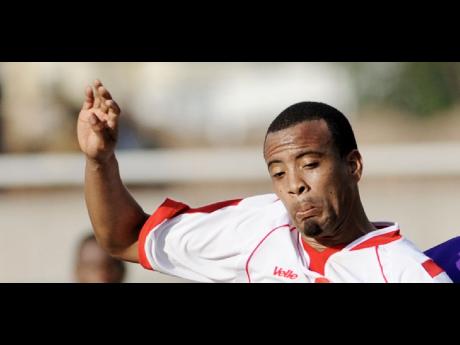 National striker Fabian Dawkins scored two goals in three minutes to lead August Town to their first hold on the KSAFA/Claro Jackie Bell KO Trophy following an exciting 2-1 win over Cavalier in the final on Saturday at the Waterhouse Mini stadium.

Dawkins, who has not played much in the Premier League this season because of a knee injury, gave the champions a dream start, when he fired home a powerful right-footed shot past Cavalier custodian, Everdean Scarlett, 25 seconds into the match.

Dawkins doubled his team's lead two minutes later, when he rose above two defenders to head home a right-sided cross from Jermaine Fletcher.

August Town continued to dominate the match and should have scored a third goal in the 20th minute, but Akeem Thenstead's point-blank effort was spectacularly saved by Scarlett, who had to dive full stretch to his left to keep his team in the match.

Playing in heavy rain in the second period, both teams failed to create any meaningful chances, because of the slippery conditions.

However, Oneil Morrison gave Cavalier a lifeline two minutes from time when he netted past goalkeeper Devon Haughton.

Dawkins, who has been out of the national set-up for three years, was thrilled with his performance.

"I feel very good because this is the first time we have ever won this competition and so it is a tremendous feeling," said Dawkins. "I have been training really hard for this and my teammates have been motivating me and so they were expecting me to score and I just went out and did that today," he said.

The feat was also a historic one for Onandi Lowe, coach of August Town, who was in charge of the team for his second match.

Lowe, who has won the competition as a player with Arnett Gardens, said winning the title is a dream start to his Premier League coaching career.

"I am very happy because this is the first time that I am coaching at this level and winning a trophy as a coach, so it is a wonderful feeling," said Lowe, a former national striker.

He added: "This team is down in the Premier League and I am here to help them motivate each other and we went out there, we played some good football and we got the victory."

Cavalier's coach, Lamar Morgan, said: "We only played for 85 minutes of the match. We fell asleep in the first five minutes of the game. We also created a few chances which we should have put away, but our strikers failed to convert them. Congratulations to August Town on the victory."