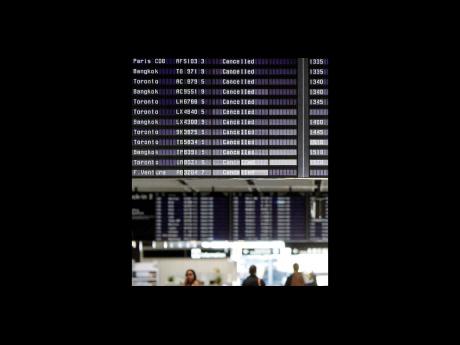 A flight information board lists cancelled flights at the airport in Zurich, Switzerland, yesterday. - AP Photo

As airline losses from the volcanic ash cloud spiralled over US$1 billion on Monday, the industry demanded European Union (EU) compensation and criticised European governments for relying too much on scientific theory - not fact - in their decisions to shut down airspace across the continent.

Shares of some European airlines fell as flight disruptions from the volcanic cloud moved into a fifth day, and the International Air Transport Association (IATA) complained of "no leadership" from government leaders - one of whom admitted to EU dissension about how to respond.

"It's embarrassing, and a European mess," IATA CEO Giovanni Bisignani told The Associated Press. "It took five days to organise a conference call with the ministers of transport and we are losing US$200 million per day (and) 750,000 passengers are stranded all over. Does it make sense?"

European civil aviation authorities held a conference call Monday about what steps could be taken towards opening airspace, and transport ministers from all 27 EU member states were to hold another later in the day.

"Naturally, it would have been better if had taken place Sunday or Saturday," Bussereau said.

British Airways said airlines have asked the EU for financial compensation for the closure of airspace, starting last Wednesday. With London among the first hubs shut down, the British carrier said it is losing as much as £20 million (US$30 million) per day.

BA Chief Executive Willie Walsh said European airlines have asked the EU and national governments for financial compensation for the closure of airspace.

He pointed to a precedent: compensation paid to airlines after the closure of US airspace following the September 11, 2001 terrorist attacks.

"This is an unprecedented situation that is having a huge impact on customers and airlines alike," Walsh said. "We continue to offer as much support as we can to our customers, however, these are extraordinary circumstances that are beyond all airlines' control."

Environment Minister Jean-Louis Borloo - the number two in the French Cabinet - said a meeting was planned Tuesday of French airlines, travel agencies and the government to examine possible state aid to the industry.

"This aid will evolve of course based on the severity of the crisis. For that, we need a European pre-accord that we have obtained - an accord in principle so this sector aid can be allocated," Borloo told France's i-Tele.

German Transport Minister Peter Ramsauer said government decisions were based on a "sea of data" - and defended the continued closure of airspace in his country. He brushed off airlines' complaints about losses, saying they know about their susceptibility to weather conditions.

"It is completely obvious that you have to calculate with such risks," he told radio station Deutschlandfunk. "And I defend myself right away against any calls to the government," to compensate for the corporate losses.