'The Plumber' - another fix-it for roots theatre 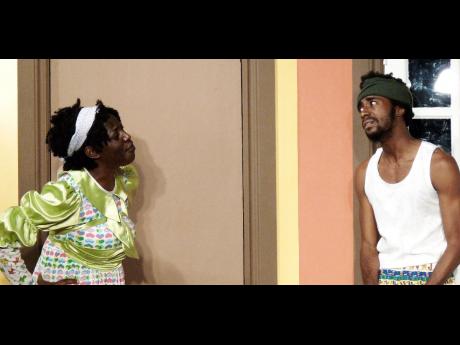 Roots plays have a bad reputation. Theatre practitioners quietly shun them. Theatre critics quietly illegitimise them. Theatre patrons quietly avoid them. In polite society, they are decried, quietly, as simple, base entertainments for the hoi polloi. Not exactly an open-minded attitude, but whatever, right? To each his quiet own.

Gentlemen, dig your trenches. The class war is on and the opening skirmish may well have been February 9 when Simon Crosskill interviewed Stede Flash (co-director of The Plumber) on 'Smile Jamaica'. Crosskill asked Flash whether he ever thought about doing 'serious' theatre, like Shakespeare, and capped a one-sided evisceration with the bullet, "It'll be a cold day in hell before I see (a roots play)."

Maybe this explains the frigid rains ending our islandwide drought.

What Crosskill evidently doesn't know (and will hurt him) is that old Willie 'The Bard' Shakespeare got a bunch of friends together, built a theatre in the capital and wrote some raunchy comedies for the hoi polloi. Titus Andronicus, The Taming of the Shrew, Merchant of Venice. When he got rich, he stopped. It took 300 years for him to be reinterpreted as high art.

So Paul O. Beale (writer of The Plumber), who got a bunch of friends together, built a theatre in the capital and writes raunchy comedies, is in pretty good company. All he has to do is wait 300 years.

But don't celebrate yet. The Plumber is not The Comedy of Errors, just a comedy with errors. And watching it invoked an entirely different popular theatre with a bad reputation - the American minstrel show. The parallels are strong enough to worry your inner sociologist.

The Plumber is, ostensibly, about a policeman suspecting and then uncovering his wife in an affair. Never mind that. It's really about bringing some familiar characters onto the stage, characters from prior Stages shows, presented so as to blur the line between person and persona - Garfield 'Bad Boy Trevor' Reid, Michael 'Stringbeans' Nicholson, Everaldo 'Stamma' Creary and Andrea 'Delcita' Wright. These performers are not in the show, they are the show. The play is best understood as a pretext for Stamma and Delcita to run through comedy routines.

The minstrel show was the same - with stock characters like Mr Bones, Mr Tambo, Jasper Jack and Zip Coon thrown into comic misadventures. Originally played by whites in blackface, the art form became a lucrative income stream for black performers willing to blacken up. (Stages Productions reportedly pays twice as much as other local troupes.) The best performers earned celebrity with blacks, among whom minstrel shows were wildly popular. They became inextricably associated with their roles, just as no one knows who Keith Ramsey is, but everyone knows Shebada (Stages' biggest star).

Not enough? Here's more. Both switch between playing off each other and directly with the audience. Both entertain with sung comic verse. Both employ sets that are little else than glorified backdrops. Both rely heavily on physical comedy and one-liners. Both use male actors for some of the female roles. And here's the punchline to the gut - in The Plumber, Andrea Wright, a beautiful dark-skinned woman, blackens up to become Delcita.

Is this a moral death knell for The Plumber, for Stages Productions, or for roots theatre? No. It is merely the teething pains of a recently reborn people. Black minstrelsy thrived from the American civil war onwards, as whites found new forms of oppression, and blacks new forms of expression. Our nation, in its latest incarnation, is not even 50 years old. As plantocracy gives way to democracy, with much kicking and screaming from polite society, the hoi polloi are having a good laugh.

In time, the blackface will disappear, revealing the black faces underneath. The best part? Simon Crosskill won't be around to see it.