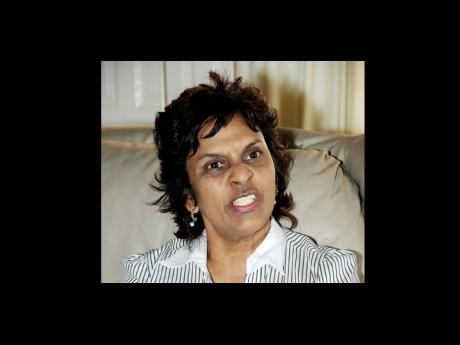 Former head of the Petroleum Corporation of Jamaica (PCJ), Dr Ruth Potopsingh, has challenged the damning findings of a forensic audit that has resulted in her sacking.

Potopsingh has also fired back at critics who have questioned her competence in the wake of the audit.

The audit, completed last October, was leaked to the media last week after the Kathryn Phipps-led board decided to remove Potopsingh.

The auditors found a menu of irregularities in the financial operations of the PCJ, with millions of dollars paid out under questionable circumstances.

While there was no indication of wrongdoing by Potopsingh, the audit reveals a lax system which allowed money to be paid out without following basic accoun-ting or government guidelines.

But Potopsingh has not accepted any blame.

"I have worked with the Government of Jamaica for 33 years, including 22 years at the PCJ in various capacities, and my professional integrity is of the utmost importance. So when a statement is made that I was dismissed because of weak management, it is very dis-turbing," Potopsingh told The Gleaner yesterday.

She admitted that some findings of the audit report were irregular, but said there were questions to be asked about the audit itself.

"The way the audit is presented, it does not give the details of these issues, and there are lots of errors, mischaracterisation and partial statements," Potopsingh said.

She told The Gleaner that she had pointed out the shortcomings in the audit report to the board and had submitted her response to the audit queries to the prime minister, the solicitor general and the auditor general.

Potopsingh was unwilling to share her response to the individual charges, saying it would be unprofessional, given that it had not yet been given to Parliament.

Potopsingh was fired last Wednesday by the PCJ board and Nigel Logan appointed to act as group managing director.

But the termination is yet to be made official, one of the many developments that has left Potopsingh fuming.

"I have been advised that my services have been terminated," Potopsingh told The Gleaner.

"On Wednesday night, there was a PCJ board meeting at which they discussed the findings of a forensic audit ... . I was told that the board had decided that based on the audit my services would be terminated because of a loss of confidence in me," Potopsingh said.

"The chairman of the board also said that a meeting would be held with me on Thursday with the HR specialist and the corporate secretary to discuss the terms of the separation, but to date, I have not had such a meeting or a letter from the board or its repre-sentatives," she added.

"When I took over, I found that there were areas of weakness in terms of procedures and manuals and I took immediate steps to address these. Naturally, many could not be done overnight, but there is a compendium of governance issues I addressed, including establishing a procurement committee.

"The year before I took over as group managing director, I was on sabbatical finishing my PhD. And in 2006, I led the negotiations with Venezuela for the sale of 49 per cent of the refinery, and those were matters which consumed much of my time."

Potopsingh also dismissed suggestions that she was not willing to work with the present Government and was opposed to some of its policy moves.

"I cannot believe that anyone could believe that I am not supportive of the Government, because I have been a government servant for more than 33 years and have worked under both administrations.

"In fact, I was employed to the PCJ under a Jamaica Labour Party administration," Potopsingh said.

She argued that while at the PCJ, she led the introduction of two grades of gasolene, the removal of lead from gasolene locally, the creation of the Wigton Windfarm, and had been at the forefront of efforts to introduce liquefied natural gas.