Editorial - For Ms Little-White and the others maimed and murdered 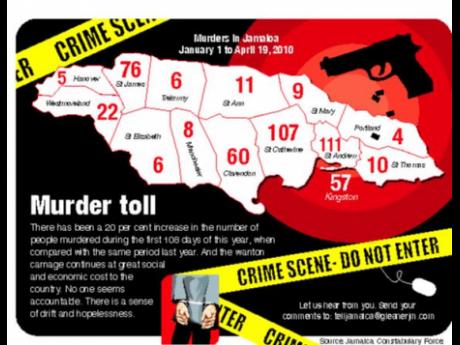 For a decade now, Heather Little-White, nutritionist and lifestyle consultant, has been paralysed from the waist down. She was shot during a robbery outside the home of a friend.

Last Saturday, Ms Little-White, a regular contributor to this newspaper, was mugged on the premises of a popular green grocer in upper St Andrew.

"Sometimes you feel, 'Why even bother with Jamaica?'" she remarked in the aftermath of the latest incident. "The monster of crime has overrun most of the good we have come to know about Jamaica."

Unfortunately, Heather Little-White's experience is not unique. Nor is her plaintive lament about the land we know she loves dearly.

Indeed, consider Ms Little-White a metaphor - for the 1,680 people murdered in Jamaica last year, for the 492 others killed in the first 109 days of 2010, and for the many other victims of criminal violence.

And therein lies the reason for the editorials we have run on our front page in recent days.

We have sought in these editorials to draw attention to the crisis of criminality that envelops the land, the fear it breeds, the skills it drains from our country, the economic stagnation it causes, and the underdevelopment it bequeaths to Jamaica.

Some may have interpreted our stark, unadorned portrayal of this problem as hostile to some sectors of the economy, primarily tourism. But the graver danger, we feel, lies in a failure to tell the truth and to honestly confront the crisis.

Or, put another way, ours has been a call to action, starting with, but not limited to, the Government, which has ultimate responsibility for policies and programmes to ensure the security and safety of the Jamaican state and its citizens.

Inaction now can only lead to a deeper economic malaise, social atrophy and Jamaica's ultimate descent into the ranks of failed states.