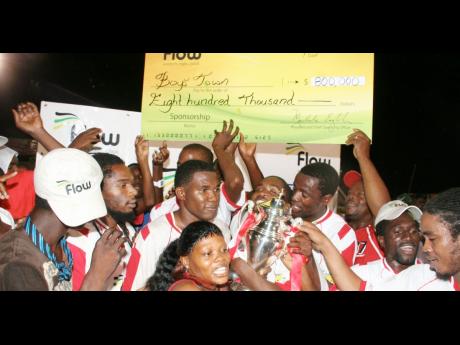 Members of the Boys' Town team celebrate winning the Flow Champions Cup, following their 3-2 victory over Humble Lion in the final at the Anthony Spaulding Sports Complex on Sunday night. - Anthony Minott/Freelance Photographer

Despite finishing a distant fourth in the Premier League last season and languishing in fifth position this season, Boys' Town have managed to retain their hold on the all island knock-out championship, following their 3-2 win over Humble Lion in the Flow Champions Cup final.

However, Price noted that he wished the level of consistency displayed by his team in the knock-out competition was transferred to the Premier League.

The Red Brigade were made to work hard for the title as it was Humble Lion, playing in their first national final, who got on the scoresheet first. In the 22nd minute, Kimroy Davis hammered a free kick from 20 yards, that took a deflection off the wall and flew past the helpless Boys' Town keeper, Philmore Crumbie.

The Humble Lion supporters were still celebrating when Boys' Town found the equaliser through George Vernal. After being awarded a free kick in the 24th minute, the Boys' Town ploy to roll the ball short to Vernal worked perfectly, as he sent a shot flying past the fully stretched Humble Lion keeper, Shawn Sawyers, from 30 yards out.

The Clarendon-based Humble Lion regained the lead on the stroke of half-time through Zico Herrera. Omando McLoud passed to Herrera, who took a touch to settle the ball before unleashing a 24-yard rocket, which nestled into the top right-hand corner.

Vernal would rescue his team with another equaliser in the 56th minute. Renae Lloyd and Shawn McKoy combined to work the ball into the penalty box, then the latter cut back a pass to Vernal, who controlled the ball, then hit a left-footed grounder inside the far post, making the score 2-2.

The game went into extra time and Boys' Town took the lead for the first time in the game, when in the 105th minute their captain, Michael Campbell, dribbled through two players in the Humble Lion box before being brought down.

Lloyd stepped up and dispatched the resulting first penalty. However, he was ordered to retake the kick, which he once again converted easily.

Price had high praises for his team's fighting spirit: "We played all our games from home and this team continues to show resilience, no matter if they go behind, they find ways of getting the game back and they really displayed good heart and courage today to come back from being down 2-1 and win 3-2 in extra time," said Price.

"I am a little disappointed in terms of how the game ended. We played well, I can't fault the team on the effort," said Bender. "Even when we were down to 10 (players) and they were leading, the team still showed character. I just thought we lost our concentration when it mattered most, down the stretch.

"Congratulations to the Boys' Town team," he added.