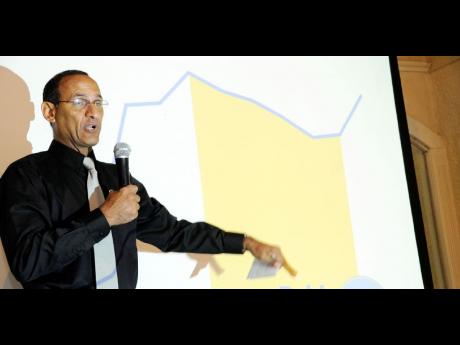 Dr Damien King, economist and senior research fellow at think tank Caribbean Policy Research Institute (CaPRI), has concluded that the Jamaica bond exchange programme (the JDX) will halt the debt's upward trajectory and could cut as much as five percentage points off the debt ratio, but only if Government is able to stick to its budget.

"The first thing to conclude is that the JDX has made a big difference," said King on Monday at a presentation of a paper on the debt exchange programme that he co-authored with Anika Kiddoe.

"It has made a big difference to the numbers that determine the debt dynamics, and the debt-to-GDP ratio is going to contract to the extent that government sticks to its budget."

King said the expected five per cent reduction in the debt to GDP ratio would result from the aggregate impact of the JDX on factors such as debt servicing, interest payment in particular, government expenditure on capital projects, and housekeeping matters such as salaries and wages, plus the revaluation of the dollar; less unplanned short-term expenses.

The King-Kiddoe paper titled 'Achieving Fiscal Sustainability in Jamaica: The JDX and Beyond' noted that the debt to GDP ratio peaked at 123 per cent in 2003, but fell to a low of 108 per cent in 2007.

The debt projections in the International Monetary Fund Article IV assessment on Jamaica produced in January is less rosy than the finance ministry's, at a flat 140 per cent of GDP this period, but falling to 114.9 per cent of GDP by 2013/14.

The JDX replaced 345 domestic bonds with 24 issues, with interest rates averaging 11 per cent, down from 17 per cent, the researchers said.

"That reduction, in turn, will reduce the share of revenue devoted to interest payments from the stratospheric 66 per cent last year to a relatively modest 43 per cent for 2010-11," the research paper noted.

The estimated contraction in expenditure is about 15 per cent, but King estimates that five per cent will be clawed back for capital expenditure and that another five per cent could be utilised for contingent or unbudgeted liabilities, some linked in the short term to the divestment of assets.

"The aggregate of all these factors yields an expected debt reduction of five percentage points by the end of the fiscal year," said the researchers, who noted that the estimate was not a forecast, "since it depends entirely on the fidelity of the fiscal outrun to the budgeted estimates, which itself is an uncertain outcome."

King also said Monday that the JDX, while a necessary prerequisite, was not sufficient on its own to turnaround Jamaica's fiscal position, and that it also required a commitment by Government to aggressive public sector rationalisation and fundamental tax reform.

"The level of aggressive cut in expenditure is not going to come easy. Public sector rationalisation will need to be very sophisticated," said King.

"With expected difficulties in meeting the cuts, some weight will have to be put on the revenue side too and so the need for tax reform to provide additional revenues without the implementation of additional taxes," King further said.

"Going forward there will also be the need for discipline and sophisticated management of contingent liabilities, he added.

Jamaica, in January, implemented a J$21 billion tax package - a precondition of the IMF bailout for a tax policy package equivalent to two per cent of GDP - and was given until December to complete the design of the public sector reform programme.

Jamaica has already missed the January target set out in the Article IV document for divestment of Air Jamaica - the new date is April 30 - as well as the J$1.26 billion target for direct central government debt.

The direct debt, as laid out in the 'Financial Statements and Revenue Estimates 2010/2011' - another side document to the Budget - was an estimated J$1.278 trillion.

The CaPRI researchers note that Jamaica's high and unsustainable indebtedness is primarily due to liabilities contracted outside of central government, and that real interest payments have accounted for a minor three per cent of GDP since 1996.

The JDX is now seen as a game changer with the potential "to pull the government back from an unsustainable fiscal trajectory".

"The fact and manner of the programme deserve kudos for both the government and domestic debt-holders. But the fiscal accounts remain vulnerable, and more needs to be done," the researchers conclude.

"Without difficult public sector rationalisation, tax reform, and in particular, disciplined management of contingent liabilities, the likelihood of another fiscal crisis in the future is high."