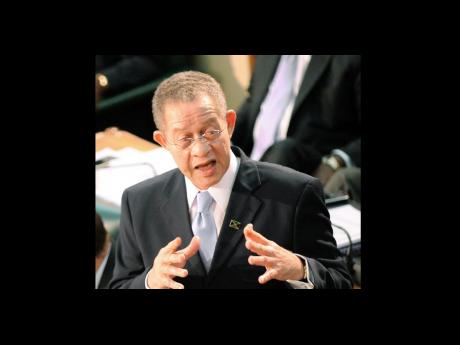 THE BRUCE Golding administration yesterday announced a package of benefits for National Housing Trust (NHT) contributors and beneficiaries by reducing mortgage rates and increasing the loan ceiling to applicants.

In his presentation to the 2010-2011 Budget Debate in Gordon House yesterday, the prime minister said NHT mortgage rates would be reduced by one per cent across all income bands.

He said the administration had sought to make the adjustment to ease the burden on homeowners who were trying to meet their obligations.

At the same time, NHT contributors 55 years and older, who have been contributing to the trust for 10 years or longer, have been offered a two-per cent reduction in NHT rates.

According to Golding, first-time applicants in this category who fell in the three per cent, five per cent and seven per cent bands would qualify for a two-per cent reduction in their mortgage rates.

With the increase in the NHT loan ceilings, new beneficiaries now have an opportunity to access $4.5 million, an increase of $1 million over the $3.5 million currently offered.

For serviced lots, applicants can now receive $1.5 million, up from the current $1.2 million.

Construction loans have also increased from $2.3 million to $3 million, while home-improvement loans will jump from $1.2 million to $1.5 million.

Some of the new measures will take effect on May 1, while other adjustments, which require detailed administrative changes, would become effective on July 1.

NHT applicants will no longer have to dig deep into their pockets to find the five per cent deposit on a scheme unit or serviced lot.

However, the applicants will continue to pay the legal and professional fees associated with mortgage agreements.

Reduced interest rates will also apply on selected loans to developers. This, according to Golding, was a move to encourage private developers to build affordable houses for NHT beneficiaries. In this regard, interest rates charged on interim construction loans would be reduced from eight per cent to three per cent.

The prime minister said this would only apply to two-bedroom units delivered at a cost not exceeding $5.5 million and studio units valued at $3 million or less.

"These loans will be for a maximum of three years," Golding added.

Low-income NHT contributors are also set to benefit from the prime minister's package of housing benefits. "We will be introducing a deferred mortgage arrangement whereby that applicant can qualify for a mortgage equivalent to 60 per cent of the price of the house," said Golding. The balance of 40 per cent will be converted into a deferred mortgage to be repaid at a later stage in the life of the first mortgage. It was noted that this was a limited benefit that would apply only to 10 per cent of the units in any one scheme.

The NHT would also be providing an extended moratorium for contributors accessing a mortgage under the trust's Build-On-Own Land and Construction loans. The moratorium will move from six months to a year.