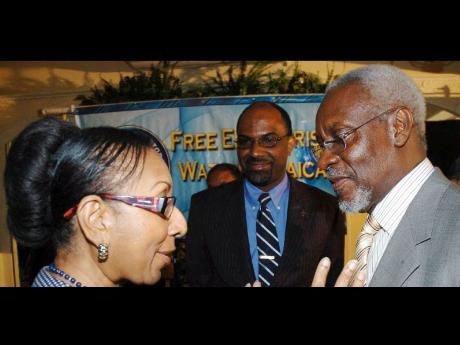 Trinidad and Tobago High Commissioner Yvonne Gittens-Joseph frames her discussion with former Jamaican Prime Minister P.J. Patterson, the special representative of CARICOM on Haiti, while Earl Jarrett, honorary secretary of the Private Sector Organisation of Jamaica, looks on. They were at a Haiti action plan meeting at the Terra Nova Hotel in Kingston. - Contributed

Jamaica has an immediate opportunity to help in the massive redevelopment process being rolled out in Haiti, the special representative of the Caribbean Community (CARICOM) on Haiti, P.J. Patterson, said recently.

A multi-donor reconstruction fund was established and a total of US$9.9 billion pledged in New York last Wednesday, said Patterson, a former prime minister of Jamaica.

The aim is to put Haiti on a developmental path, following the devastation caused by the 7.0-magnitude earthquake on January 12, which killed more than 230,000 persons and left approximately 1.2 million homeless.

"I see the possibility of Jamaica once again becoming a focal point for the developmental activity that is going to take place in Haiti," Patterson said.

He was updating members of the Private Sector Organisation of Jamaica (PSOJ) at a breakfast meeting at the Terra Nova Hotel on April 8 about the Action Plan for National Recovery and Development of Haiti.

The PSOJ has already started playing a coordinating role for its sector, honorary secretary of the organisation, Earl Jarrett, told the meeting.

"It is for us, the private sector in Jamaica, to recognise that Haiti represents as significant an opportunity as we can have for several years to come."

Patterson pointed out that a three-phase plan had been prepared for Haiti at the New York donors' meeting: a six-month emergency period, an 18-month reconstruction term, then a broader development period expected to last more than a decade.

Jamaica was poised to be a key provider of goods and services for Haiti's redevelopment thrust, said the former prime minister.

"We have human skills, we have talents in all the various disciplines that can be made available to assist.

"There is no field of national endeavour in which we in the Caribbean cannot make a contribution at this time for the development and rebirth of Haiti," he said.

The Jamaica Institution of Engineers has already indicated its willingness to make available the building code for Haiti which was developed in Jamaica, Patterson asserted. "They are not just allowing people to start rebuilding without standards."

The issue of land tenure would need to be addressed, he said, because the construction in the earthquake-ravaged country could neither be carried out nor financed, in the absence of state regulation.

Haiti's chamber of commerce has offered to host consultations with their Caribbean counterparts, Patterson told the PSOJ meeting, which was sponsored by the Jamaica National Building Society.

He advised the PSOJ members to build partnerships with companies outside of CARICOM where this was necessary.