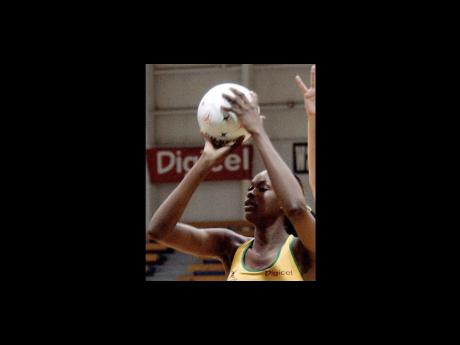 Both Romelda Aiken and Althea Byfield had below-par performances, but the results were different for their sides in the ANZ Championship on Monday.

Aiken, the lanky Jamaica goal shooter, scored just 29 goals from 37 attempts to help the Queensland Firebirds break the 'curse' of Invercargill, with a 56-41 victory over the Southern Steel.

Her compatriot Byfield failed to put up significant numbers in the defensive circle, where she had just five deflections, and the Northern Mystics slumped to defeat at the hands of home team and defending champions Melbourne Vixens, 62-51.

At Stadium Southland, the Firebirds achieved what no other Australian side has managed to do in the three-year history of the ANZ Championship.

The Firebirds beat the Steel at home in Invercargill - renowned as the domicile of the most passionate crowd of the sport in New Zealand.

A serious first-quarter effort, led by their captain, Lauren Nourse, paved the way for the Firebirds outscoring the home team 18-9.

The Firebirds continued the rampage in the second period, when goal attack Natalie Medhurst continued her blistering form, sharing the scoring duties, and feeding Aiken with a variety of passes. They took the Queenslanders into the half-time break ahead 33-20.

Aiken and Medhurst continued to get the service from their midfield, but the Steel suffered at the other end, and so the Firebirds forged a 47-31 lead at the end of the third quarter.

The Firebirds strengthened their resolve in the final period and ran over their shell-shocked opponents for their second victory of the season.

At Hisense Arena, a big effort from Byfield for the Mystics down the stretch, failed to keep the Vixens in check.

The Vixens were primed for another comprehensive victory, when they assumed a 17-10 lead after the first quarter. But the middle quarters belonged to the Mystics, who got within a hair's breadth of the top seeds, trailing 25-27 at half-time and 42-28 after the third period.

The Mystics couldn't match the composure of the finely-tuned Vixens in the final 15 minutes and the long-ball passes proved to be their undoing.

This coming weekend, Byfield and the Mystics face the Canterbury Tactix on Saturday on home soil at Trusts Stadium in Auckland, New Zealand; Aiken and the Firebirds meet the Vixens on Sunday at the Brisbane Convention & Exhibition Centre in Brisbane, Australia; and Carla Williams-Borrego, another Jamaican and this season most prolific goal shooter, travel to the Challenge Stadium in Perth, Australia, to tackle the West Coast Fever.