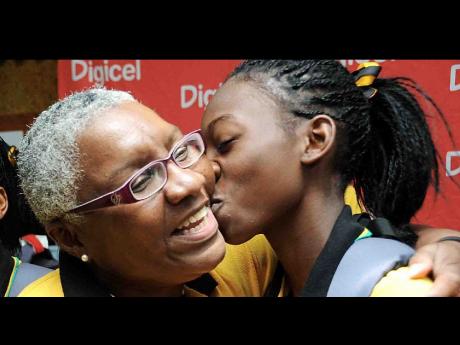 Jamaica's Sade Ffrench (right), the Most Valuable Player of the Caribbean Netball Association Jean Pierre Under-16 Championship, kisses Jamaica Netball Association president, Marva Bernard, during a reception at the Norman Manley International Airport's VIP Lounge on Sunday, when the team returned to the island. - Photos by Ian Allen/Photographer 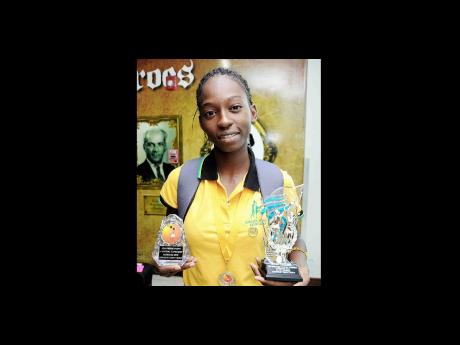 The Ffrench family was a permanent fixture in Jamaica's netball programme for a decade, spanning the period from 1996 to 2006 when Jodi-Ann Ffrench played her final match for the Sunshine Girls.

Fifteen-year-old Sade Ffrench has, however, emerged to carry on the legacy of her older sisters.

On Sunday, she returned to the island with Jamaica's Under-16 squad, which successfully defended their title at the Jean Pierre Caribbean Netball Championship in Barbados.

To top it off, the teen emerged as Jamaica's Most Valuable Player of the tournament, which saw the team capturing their fourth consecutive title hold and their ninth overall, in 10 tries.

The Queen's School student is naturally elated to have been selected as the Most Valuable Player, but was quick to deflect some of the praise to her teammates.

"It is a wonderful feeling, I can't tell you how I am feeling right now," said Ffrench. "I would like to say thanks to my teammates for going out there and winning because if it weren't for them we would not have won," she added.

Young Ffrench started playing netball at the tender age of eight, representing Rollington Town Primary, which she helped to advance to the quarter-finals of the Primary School competition.

Ffrench said: "From I was younger I started playing netball with my sisters who are former netball players of Jamaica and I have followed in their footsteps. I know I will be going on to the Under-21 (team) and take it from there."

The Tivoli Gardens 'B' team representative plays both goal attack and wing attack, and has already tasted success with The Queen's School, helping them to the all-island Under-16 title last year, emerging as the leading goalscorer.

The eldest of the Ffrench sisters, Nadine, was a member of the first Jamaica Under-21 team, and was in fact the youngest member on the team, which represented Jamaica in 1996 at the World Youth Under-21 Championship in Canada. She played her final game for the Sunshine Girls during the 2003 home practice series against Australia and England.

Jodi-Ann, who still plays for Tivoli Gardens 'A', played her first match for Jamaica in the Under-16 Championship in Antigua in 1998, and last donned the national colours in the 2006 home Test series against Trinidad and Tobago.

Jamaica Netball Association (JNA) president, Marva Bernard, is very happy to have another Ffrench on the national team.

Bernard said: "I think she is an excellent player, following in the footsteps of her other two talented sisters. I am sure that Sade, if she keeps up what she is doing, will no doubt follow in her sisters' footsteps. I just hope she stays longer in the programme than they did at the senior level when she gets there, because it is not a matter of if she gets there.

"My involvement in the Ffrench family with netball goes as far back as 1995 and I am really happy to see another Ffrench on the national team," she added.