Ronron set for a romp 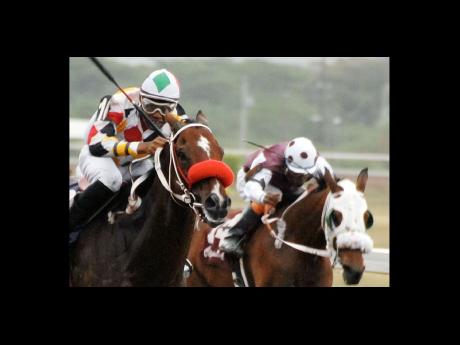 OASIS (left), with Jevaughn Erwin aboard, surges strongly towards the finish to win the eighth race over seven furlongs for the Fontainbleu Trophy (3-y-o and Up Open Allowance), at Caymanas Park on Saturday. CIO MOTO (right), with Aaron Chatrie, finished fourth. - Colin Hamilton/Freelance Photographer

Having played second fiddle to the brilliant unbeaten DOUBLE THE HONEY in her last two races, Gary Subratie-trained American filly RONRON should have little difficulty in winning today's third race for imported horses at Caymanas Park over 1400 metres.

The nine-race programme offers no trophies, hence this race, with a total purse of $715,000, is the focus of attention.

Although champion trainer Wayne DaCosta has been creating waves this season, mainly with his trio of unbeaten American horses CASSANOVA BOY, DOUBLE THE HONEY and SIR VON, as well as FLUFFY who has won her last two races, RONRON is no pushover in that league.

By Lion Heart out of Technical Analysis, the highly thought of RONRON, twice beaten by the 'unbeatable' DOUBLE THE HONEY behind fast times recently, stands out in today's third. And with no 'HONEY' around, RONRON should make no mistake in the seven-strong field.

Subratie, in fact, thinks very highly of RONRON, so much so that he has said she is the best horse in his stable.

In only three starts to date, RONRON has established herself as one of the foreigners who can run.

She made a smashing debut over 1100 metres as a two-year-old last November, running on strongly leaving the furlong pole to win by 6 1/4 lengths from FLUFFY, covering the distance in the smart time of 1:05.3 with Paul 'Country' Francis aboard.

Although beaten by DOUBLE THE HONEY in her two races this season, RONRON lost few, if any, marks in defeat. She was beaten into second place by 9 1/2 lengths over 1100 metres on March 17, a race in which DOUBLE THE HONEY covered the distance in the incredible time of 1:04.1. Next time out on April 5, she narrowed the margin to only two lengths when going 1200 metres, holding her gallop well to chase home DOUBLE THE HONEY, who clocked a smart 1:11.1 for the distance. RONRON finished in a time of 1:11.3 - fast by any standards.

She reports in good nick for today's encounter and, with the additional 200 metres even more to her liking, should pack too many guns for the luckless BELOW THE WAIST, who has been administered Lasix for the first time.

RONRON carries a mere 52.5kg with Francis again at the helm and they should be racing the clock from some way out.

Other firm fancies on the card are ALLORA in the first race; SAMBA DANCER to go one better in the in the fifth; BROTHERLY LOVE in the sixth; MAHARANI in the seventh; THE BEST MAN in the eighth; and COBRA in the night pan.