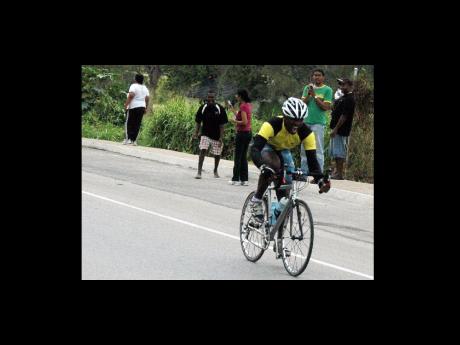 Montego Bay's Leighton Anderson emerged the toast of the 10th Rotary Club of Montego Bay East Bikeathon 2010 Jamaica Challenge, when he won the 90km Pro-Am event from Ironshore in Montego Bay to Duncans in Trelawny and back, in two hours and nine minutes.

"It was quite a challenging race as I felt a lot of pain and cramps along the way but I was quite determined," said the 28-year-old Anderson, who is attached to Nitro Cycling Club. "Now that it is over I am quite satisfied with the effort I put in and the result I got."

In a race in which the lead changed hands on several occasions, especially on the return trip to Montego Bay, Anderson had to dig deep over the last 400 metres to survive stiff, late challenges from Sheldon Pellington and Kemar Dunn, who finished second and third, respectively.

Vaughn Phang, president of the Jamaica Cycling Federation, who was in attendance at the bikeathon which had its headquarters at Whitter Village Centre, was impressed by the quality of the cyclists.

"The Pro-Am produced a very exciting finish, but what I like most was the fact that I saw a lot of women cyclists here today," said Phang. "Overall I think the entire bikeathon was quite good."

"I feel like I am in a dream," said Blake. "This is one of the best things that has ever happened to me, I feel really proud of myself."

The 25km Runathon, which was one of the stellar attractions on the multifaceted programme that featured a walk and run event, popular Montego Bay basketball player, Jermaine Rerrie, took the male section ahead of Michael Campbell and Derrick McKenzie, respectively.

"It was tough but I told myself that there would be no giving up," said Rerrie. "Campbell and McKenzie really pushed me towards the end but I was determined to get this win."