Collister remembered as a nationalist 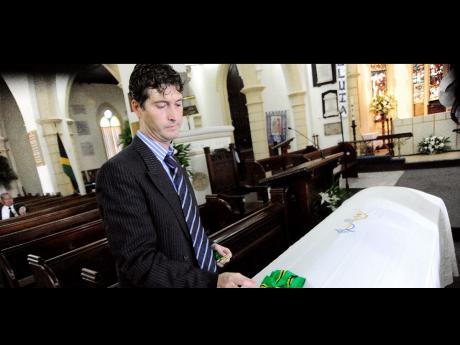 Paul Collister puts his father's Order of Jamaica insignia on his coffin during a thanksgiving service for the Honourable Roy Collister at the St Andrew Parish Church, Half-Way Tree, yesterday. - Rudolph Brown/Photographer

Among those in attendance at the service of thanksgiving for the business stalwart were politicians, diplomats and persons from the business community.

He was eulogised as a loyal, dedicated and profound businessman who left an indelible mark on the lives of several individuals.

The few who spoke during the funeral recalled his contribution to the Jamaican business community, such as his participation in the formulation of national policies, which have influenced foreign exchange rates, tax reform and regional trade.

Former business partner Alison Peart described him as a man with good character and good spirit, who was always on the go.

"Having nothing to do wasn't his priority ... he was caring to everyone and was always willing to help," she said.

Alluding to the many distinguished parts he played in the financial sector, such as the past president of the Jamaica Chamber of Commerce, head of the Private Sector Organisation of Jamaica and president of the Caribbean Association of Industry and Commerce, Arnold Foote, his former friend, said his exceptional performances in the public field bore much fruit for the country.

"For years he was very active in the financial field; the job he did as a public servant was outstanding," he said.

"He was a man of integrity, dignity, dedication, a good family man and a friend."

The Right Reverend Robert Thompson said life was really a gift to man, but Collister had done more with the gift than most, with his work for the country.

"Roy not only received from God but he gave back through the kindness he showed to his family and the service to the country," he said.

Thompson noted that Collister belonged to the generation of Jamaica that believed in preparing the country for a greater good. According to Thompson, Collister was open to anything that would allow for that preparation throughout his life.

Collister, who was conferred with the Order of Jamaica on March 19, died April 11 at the age of 74 after battling with cancer. His body will be cremated and sent back to the Isle of Man where he is from.