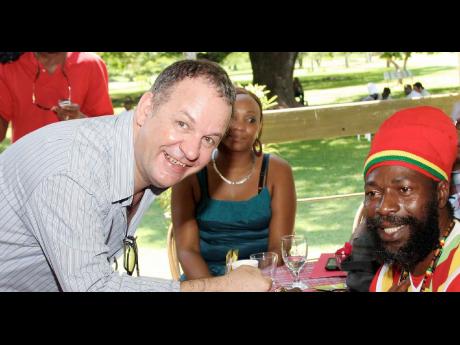 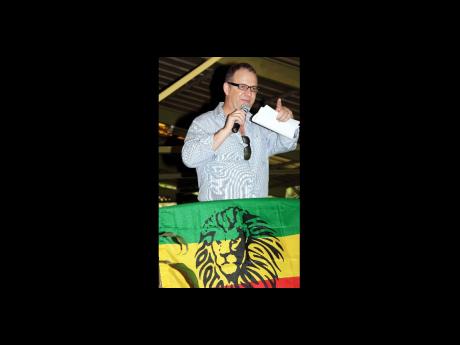 Giovanni Vinci, booking manager for the Rototom Sunsplash, addressing the audience at the event's Jamaica launch on Tuesday at Ashanti Oasis at Hope Gardens, St Andrew. - Photos by Nathaniel Stewart
1
2

In its 17th year, the Rototom Sunsplash will move from its long-time home in Italy to a new country, Spain, but it was launched at the Ashanti Oasis, Hope Gardens, St Andrew, on Tuesday afternoon in homage to reggae's home.

Giovanni Vinci, booking manager for the festival, and its art director Sabrina Trovant represented the festival, Vinci saying, "Jamaica is the place where everything was born. Without Jamaica we would be without Bob Marley and all the rest, the great Bob Andy, we would not have reggae".

The festival's official press packaging also acknowledges its Jamaican roots, as it says "artistes from all over the world recreate the atmosphere of the original Jamaican Sunsplash".

Andy, who was at the launch, is one of a number of performers confirmed for the August 21-28 staging of Rototom Sunsplash at Benicassim, along with Albarosie, Big Youth, Glen Washington, Anthony B, Aswad and Alpha Blondie, in addition to a number of Italian bands.

Albarosie was also there, and after Vinci spoke to some of the trials the festival has faced in Italy ("We went away from Italy not because we chose to, but because we were forced... It is not an easy life in Italy at this moment"), he thanked Albarosie for the song Free Rototom Free.

"We needed it. When the tune arrived we felt very powerful. He is the legacy between Italy and Jamaica, the black and white culture. He is the person that represents a multicultural society," Vinci said of Albarosie.

Professor Carolyn Cooper of the University of the West Indies (UWI), Mona campus, spoke about her "mind-blowing" experience at Rototom Sunsplash, adding that she questioned, "Where have we gone wrong? I said the biggest reggae festival in the world should be in Jamaica."

Then, when she reflected, Cooper said she thought it was "too bad for us" that others recognise our culture, while we don't.

"What we have is a world-class product and people all over the world have added value to that product, like Rototom Festival, and we just have to say big up and gwaan same way," Cooper said.

Both Vinci and Cooper spoke about the Reggae University component of Rototom Sunsplash, which brings the performers and academics into play in a setting where they talk about the music. As Cooper put it, "that is the part where the intellectual added value manifests itself". And Vinci said the inclusion of the Reggae University "does not mean that the music is not important. It is the music and something else".

Vinci told The Gleaner that while he is not sure what effect the move to Spain would have on attendance, there are early signs of a shift in the composition of nationalities. Trovant pointed out that 120 nationalities are represented at Rototom. While the number of pre-bookings is about the same as last year, there are fewer persons from Germany and more from Spain who have already committed to attending. There are expectations for not only more Spanish people, but also more English (Spain being a popular holiday destination) and French, with fewer Germans, Swiss and Austrians.

However, Trovant said that buses are being arranged from Italy, Germany, Switzerland and Slovenia.

Vinci also expects a number of persons from Central and South America and he is anticipating more than double the 1,000 persons from England who attended Rototom Sunsplash last year. There will be a press launch for the festival in London in July.