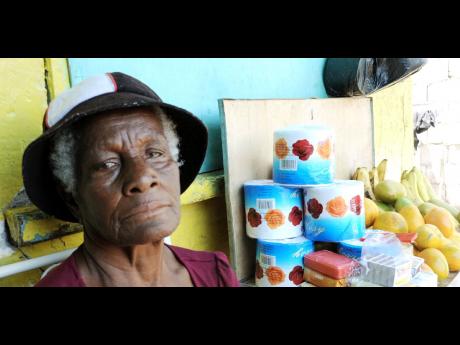 Icylda Hutchinson, 73, is saddened by the death of her son, Christopher Graham, who was among five persons killed at a dance in April 1980. - Norman Grindley/Chief Photographer

The bitter memories of 30 years ago still haunt the survivors of the Gold Street Massacre, in which five persons were killed, and at least a dozen shot and injured at a dance in a small tenement yard near the seaside in central Kingston.

"It was the loud explosions that woke me up. The gunshots sounded like a heavy downpour beating against the wall," recalled Marcia Robinson, who was 12 years old at the time of the incident.

"When I became fully awake, I felt something heavy lying on my feet. It was the blood-soaked body of one of the men who was killed."

Robinson's sibling, Dianne Campbell, remembers trembling in bed with her other sister, Stacey. They were locked in a room. Dianne was eight at the time. She said the shooting lasted for quite some time.

The dozens of small holes punched into the walls and fences of 4 Gold Street by the high-powered weapons used by the gunmen is a testimony to what took place in the wee hours of Sunday, April 20, 1980.

"They had targeted some people, and the plan was to burn their houses and kill the occupants. But when they invaded the area, they came up on the dance and thought most of who they wanted would have been there, so they attacked the dance," said Ace Mann, a former influential member of the community.

He said Southside was one of those communities whose residents were not heavily armed.

"He had just finished his dinner and left for the dance. He was one of the selectors on the sound system. Because of the child that he was, up until this day I still believe he was the one who was going to come and help me," said Hutchinson.

She recalls the incident as if it happened yesterday. The fruit vendor remembers tearing up her bed sheets to assist with the bandaging of some of the injured persons.

Jacqueline Jeffrey, 45, was almost killed. The mother of five, who was at the dance when the gunmen struck, said one of the shots ripped through her right breast.

"I ran and climbed some fences until I reached on Ladd Lane. Two men picked me up, then minutes after a police jeep came along and they took me to hospital. Since that, every time I hear an explosion, I get weak and feel like I am going to faint," said Jeffrey.

A Rastafarian who was at Gold Street when a Gleaner news team revisited the scene two weeks ago, said some of the patrons had to lie down and pretend as if they were dead. The men had to kick down fences on Gold Street and Foster Lane for the people to escape.

"I remember one of the injured persons fell on 'Fat Earl' and blood up his clothes; he lay on the ground like he was dead. The gunmen thought they had killed the then area leader Franklyn 'Chubby Dread' Allen and left feeling victorious," the said the Rastafarian.