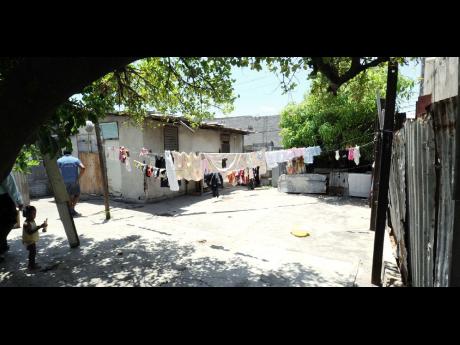 The yard at 4 Gold Street where the April 1980 massacre took place.

Former Prime Minister Edward Seaga, who was opposition leader at the time of the Gold Street Massacre, alluded to politics as the motive behind the bloody assault. However, then Prime Minister Michael Manley blamed Seaga's Jamaica Labour Party for destroying the peace which existed in the constituency.

In his recently published book, My Life and Leadership: Volume 1 - Clash of Ideologies 1930-1980', Seaga said the resentment over the Green Bay Massacre was still burning in Southside, when an irate crowd of JLP supporters formed a solid wall of bodies across Gold Street, central Kingston in mid-April 1980, and prevented Manley, who was also member of parliament, from touring the area.

According to Seaga's book, four days later, the people of Southside had bodies to bury after gunmen launched a Brigadista-style attack on a dance on Gold Street that left five people dead and at least a dozen injured.

He said the attack was carried out with military precision, in an urban warfare strategy chillingly described in the book The Road Not Taken, by Colin Dennis, which also describes the training of young people who were sent to Cuba by the People's National Party (PNP) Government where they learned guerrilla warfare under the Brigadista programme.

Seaga further explained how the gunmen arrived by boat from the nearby, desolate seaside at midnight on April 20. They approached the dance from three directions, cut off avenues of escape, locked up the constables in the police station on Gold Street, and proceeded to carry out their murderous attack on the dance in progress.

The gunmen, dressed in military fatigues, opened fire on the unsuspecting revellers and returned to the cloak of darkness from which they had emerged. The funeral became a massive political demonstration and a requiem for victims of a terrorist regime.

Immediately after the incident, Manley denounced the attack and those who were responsible. He said he was shocked and horrified by the events which took place on Gold Street.

Manley explained how he and the executive members of the constituency had worked hard to create an atmosphere which would make any form of political and gang violence unnecessary.

He blamed the JLP for destroying the existing peace in the constituency at the time.

Southside is located in the JLP stronghold of central Kingston. In 1980, the constituency was known as East Central Kingston and was contested by Manley and the JLP's Ryan Peralto.