A new 'dragon' in town 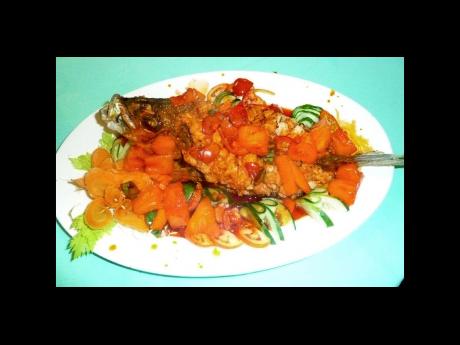 The Chinese Fire Dragon Fish, deboned snapper with Jamaican white rum and sweet and sour sauce is already one of the favourites. - Photos by Daviot Kelly/Staff Reporter 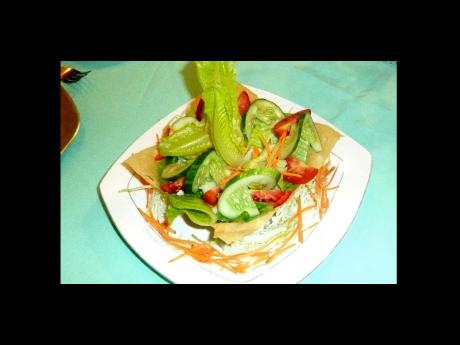 Garden Salad is a nice way to get your meal experience started at the new Dragon Palace restaurant in Village Plaza. 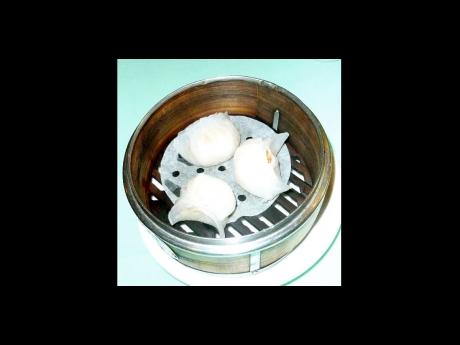 The juicy shrimp dumplings are another part of the Dim Sum menu. 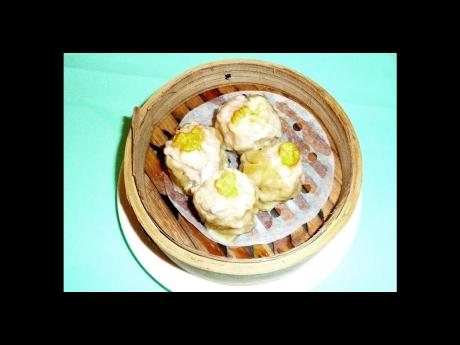 The Pork Siu Mai contains bits of shrimp as well and is a tasty piece of the Dim Sum buffet on a Sunday. 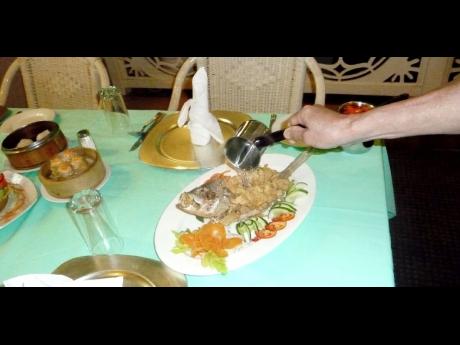 Here comes the rum! The chef adds 'the whites' to the Dragon Fish dish at Dragon Palace restaurant in Village Plaza on Tuesday.
1
2
3
4
5

There's a new flavour inside the Village Plaza. Dragon Palace restaurant opened in March, the evolution of the popular Bamboo Village restaurant. Andy Ip is one of the three owners, Philip Shum and Amy Cheung are the others and Ip told Food about the 'new' establishment.

"We used to operate a restaurant the Bamboo Village in Mandeville but now we're here," he said. "So we have lots of experience in Jamaica." Ip described Dragon Palace as a fusion restaurant, which combines various culinary traditions into one; there is no specific style. So you will find authentic Chinese cuisine with everything from seafood to steak, but also more European delights like lobster bisque (which is already popular), surf 'n' turf and even Caesar salad. But they even have a selection of Jamaican dishes like curry goat and oxtail on their menu.

The fusion style is very trendy in big cities like New York, Tokyo and Hong Kong and Ip said this would help to set them apart from other Chinese restaurants.

"Competition is high but everybody is coming with the same menu. We want to create new dishes. So we take new stuff from places like Hong Kong and parts of China and bring them here," he explained. Ip also said that every few months, the dishes would be done in different styles representing China's diverse regions. So the flavours of Sichuan and Shanghai will come to your tastebuds. The chefs are both Chinese and Jamaican, and both groups are adept at cooking the other's cuisine.

They also offer 'Choi Fan' for takeaway orders. Choi Fan is a combination of at least two items on the menu in one lunch. They also prepare a special team for outside catering and partying. The Sunday brunch is very much a family affair, with features like face painting and clown acts for the children.

"Every Sunday we also give something different to the children, whether popcorn, cotton candy or ice cream," he said. The dream is to have a garden/outdoor type restaurant with fancy decorations like a river bridge to give that authentic Asian restaurant feel.

"In future, we're thinking of building cottages where people can see you cooking. Maybe on one side the traditional and on the other side dishes like jerk pork and chicken. We like dining and we always want to try different types of food." He said the response has been good even though it's early days.

"We're getting everything settled like explaining the new menu. If the waiter doesn't know the menu, he can't help the customer," he said. If you've ever been to its predecessor, Dragon Palace's decor remains the same but Ip assured new things are on the way, to give the restaurant a look befitting its name.

Dragon Palace is open every day including most public holidays. Sunday Champagne Brunch happens every week along with a sumptuous Chinese Dim Sum buffet with a selection of shrimps, fish, chicken and others as main course. This is served with a glass of complimentary champagne or fruit punch per person. For special occasions, there are three function rooms, perfect for weddings, birthdays, meetings and special events like Mother's Day (hint, hint).