NCU librarian is 2010 All-island Boss of the Year 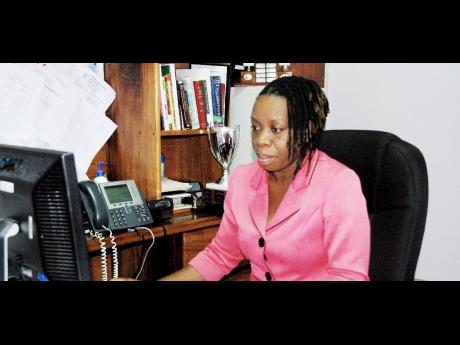 Boss of the Year Grace Carr-Benjamin in her office at Northern Caribbean University in Manchester. - Contributed

Career Librarian and director of library services at Northern Caribbean University (NCU), Grace Carr-Benjamin, has been named All-Island Boss of the Year 2010-2011. The selection was made earlier this month the Hotel Tim Bamboo in Portland.

The announcement came this week as Jamaica joins the rest of the world in celebrating Administrative Professionals Week.

"It's awesome, it really feels good," said an elated Carr-Benjamin. "I am quite humbled at the recognition and the commendations from my colleagues here at NCU and the profession of librarians. I feel very privileged to continue the tradition of excellence that has been enjoyed by NCU over the years. My staff has been the wind beneath my wings, and I thank them for being there with and for me. I also would like to thank those who had the faith in believing that I could achieve this award for their nomination."

One of the challenges of the competition was that each person had to prepare for a question from a topic locally or internationally in the areas of business, civics, social studies or economics. The issue had to be addressed in five minutes.

"(Carr-Benjamin) is a great facilitator of professional and personal development of the staff," said Nicola Palmer, acquisitions and serials librarian at NCU. "She has a passion for the work of the library. She is ambitious and a go-getter that you can count on to get things done for and within the library. She is quite easy to work with and we all work together for the good of the facility."

Carr-Benjamin, who previously served as the collection development librarian at the Hiram S. Walters Resource Centre (NCU Library) in August 2007, assumed the position of director of library services in December 2007 where she currently supervises a staff of 16.

She serves in various capacities on various library committees and was given the award as top manager at the annual faculty and staff awards ceremony held in 2009. Her hobbies include reading, having stimulating discussions, interacting with students, counselling the unmarried and watching classical movies.

Other noted awardees within the Adventist community include Pastor Charles Brevitt, president of the Adventist Church in Western Jamaica. He was crowned Boss of the Year for the parish of St James.

Also, Shannette Smith-Rowe, secretary to Carr-Benjamin, was elected Administrative Professional of the Year for the parish of Manchester.