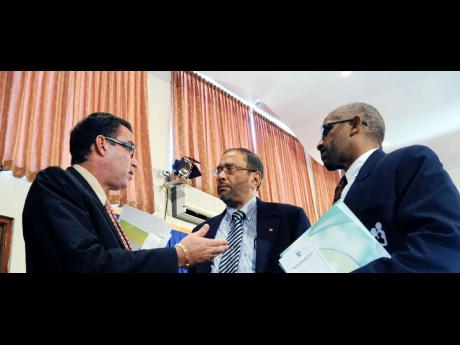 The management of the National Housing Trust (NHT) is expecting thousands of Jamaicans to benefit from the changes announced on Tuesday by Prime Minister Bruce Golding.

The NHT is giving up $840 million in annual revenue to finance the changes which include lower interest rates, increases in the loan ceiling and special interest rates for public-sector employees.

But chairman of the NHT Howard Mitchell obviously believes that is a small price to pay to address the critical housing needs of Jamaicans.

Mitchell is also confident that the changes will not affect the financial integrity of the trust.

"The concern that I have, and I think it is shared by ... the political directorate, is that in our stewardship to our contributors we are not reaching as many of them as we need to," Mitchell told the weekly post-Cabinet media briefing yesterday.

"In the past, I have pointed out how increasing prices and shrinking incomes have made it difficult for as many as 80 per cent of our contributors ... to access benefits from the NHT. In fact, of the 400,000 contributors we have served 140,00 to 150,000," added Mitchell.

Not what NHT wants

He argued that while that was good it was not where the NHT wanted to be.

According to Mitchell, the new measures announced by Golding are a further attempt to provide accessibility and affordability to NHT contributors and to reduce the burden on those who are paying mortgages.

The NHT chairman pointed to the example of an NHT beneficiary now paying a monthly mortgage of $31,000. This beneficiary is to enjoy a $2,000 reduction in payment each month when the one per cent cut in interest rates becomes effective on May 1.

That interest rate reduction is expected to provide an ease for 92,000 Jamaicans who have already benefited from the NHT.

Mitchell argued that the changes should impact Jamaicans positively without putting the NHT at a financial risk.

"Three or four of these policies will be funded out of surpluses that we have made and that we will make, if the surplus is not there the benefit will not be there.

"Further, the financial shock of, for instance, the reduction in interest rates, is managed because we have reduced the interest on refunds to contributors," Mitchell said.