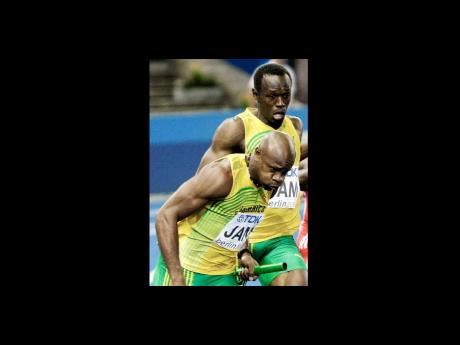 Usain Bolt, the world's fastest man over the 100m and 200m, will face off against compatriot and former 100m world-record holder, Asafa Powell, as Jamaica is set to place two teams in the USA vs The World 4x100m relay at the Penn Relays, which begins today at the University of Pennsylvania, Franklin Field, in Philadelphia.

Bolt will anchor the pro-Racers 'Jamaica Black' team, while Powell is expected to anchor the MVP-heavy 'Jamaica Yellow' outfit in the highly anticipated clash, which will also feature two teams from the USA and two from Canada.

In the 2008 Olympic Games in Beijing where Jamaica broke the world record in the 4x100m, it was Bolt who handed the baton to Powell on the anchor leg. The same sequence occurred a year later in Berlin at the IAAF World Championships in Athletics, where Jamaica also won gold.

The pair will come face to face for the first time this season and will come up against the likes of Darvis Patton, Walter Dix, Travis Padgett, Shaw Crawford, Mike Rodgers, Ivory Williams and Mark Jelks, who are all in the USA's pool of athletes for their two teams.

Jamaica's athletics boss, Howard Aris, revealed knowledge of ongoing discussions concerning the possibility of two Jamaican teams, but Olympian Donald Quarrie, who is responsible for the contingent at the relay carnival, was quoted confirming the development.

"We will have two sprint relay teams for men and I should know the order by tomorrow (today), but Usain and Asafa will be running the anchor legs," said Quarrie.

At press time, Quarrie was unavailable as he was in-flight to Philadelphia and could not speak further.

However, reports are that the 'Jamaica Black' team will comprise Bolt, Yohan Blake and Marvin Anderson, with 'Jamaica Yellow' set to feature Powell, Michael Frater and Nesta Carter.

The other two places will be filled by a pool that includes Dwight Thomas, Lerone Clarke, Steve Mullings and Mario Forsythe.

Incidentally, the fastest time of the year is currently held by the Racers team, which ran 38.08 at the Gibson Relays inside the National Stadium earlier this year.