Grange wants all primary schools to be part of championship 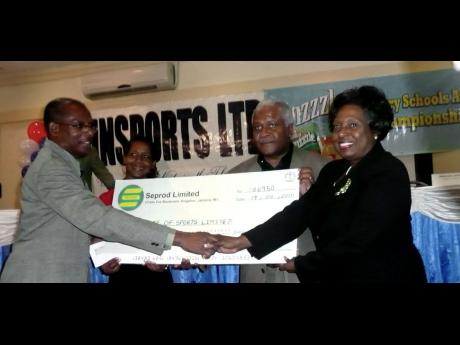 Minister of Youth, Sports and Culture, Olivia 'Babsy' Grange (right), accepts a cheque for $2 million from Carl Danville (left), chief operating officer, Seprod, during the launch of the INSPORTS/Swizzzle Primary Schools Championship at the Hilton Kingston hotel on Tuesday. Looking on are the Reverend Al Miller (second right), chairman of INSPORTS, and Mrs Marcia Kitson-Walters, sales and marketing manager, Seprod.

The annual INSPORTS/Swizzzle Primary Schools Athletics Champion-ship has given birth to two of Jamaica's top senior athletes and a number of junior champions.

The likes of World champion and Olympic100m gold medallist Shelly-Ann Fraser, 400m hurdles champion Melaine Walker, Carifta Games Under-17 200m champion and record holder Jazeel Murphy, World Youth 200m champion Ramone McKenzie, and Claudine Williams, who, at age 16, was Jamaica's youngest athlete to have entered the Olympics, are all products of the championship, which will be staged for the 29th occasion on May 4, 6, 7 and 8.

Minister of Youth, Sports and Culture, Olivia 'Babsy' Grange, while speaking at the press launch for this year's championship on Tuesday at the Hilton Kingston hotel, disclosed that she was desirous of all primary schools across the island becoming part of the meet.

"I want to see this championship expanded to embrace all primary schools across the island," said Grange. "There are over a thousand primary schools and we now have only 69 schools participating, but we are improving every year with the numbers, which is good.

"We have in excess of 800 communities across Jamaica and there are primary schools dotted across the island serving those communities and it is important that we reach all these young people because you are the future and if we can search and find you and identify the talent that you have, then we can ensure that you have a bright future if you use that talent," Grange noted. "We will help you to build it and you use it so that you can become great Jamaicans."

Minister Grange believes that the championship is vital in the development of our young track and field talents across the island.

"The championship has proven to be a very lucrative development arena for many athletes over the years," said Grange. "Like a pregnant woman, the INSPORTS/Swizzzle Primary Schools Athletics Championship is really the first trimester where all the crucial elements for a strong foundation are carefully observed," she added.

The championship has received a fianncial boost this year with Seprod - under their brand Swizzzle - which have been one of the major sponsors of the championship since 2003, increasing its sponsorship from $700, 000 to $2 million.