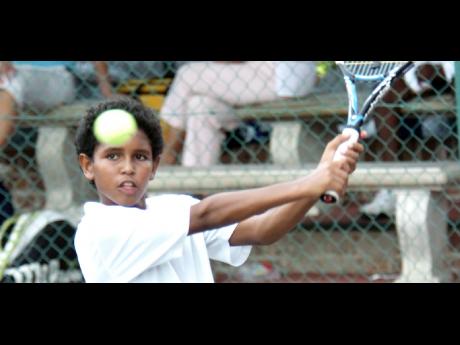 Phillips ... was unbeaten throughout the tournament.

Jamaica's 16-and-under girls team won two and lost two matches to take sixth place (out of 14 countries), while the boys equivalent defeated Bermuda to finish ninth (of 15) in the junior Davis Cup/Fed Cup competitions which concluded on Sunday at the Complejo Deportivo in San Salvador, El Salvador.

The girls beat Trinidad and Tobago 3-0 but lost by a similar margin against top-seeded El Salvador in Group One round-robin action. They also lost 2-1 to Puerto Rico.

However, the Jamaicans beat fourth seeds Honduras 2-1 in quarter-final play on the weekend. In the tie against the Central Americans, Rose defeated Raquel Argenal 0-6, 7-6, 6-0 in their singles matchup, while Fabiana Fitanza evened the match with a 6-4, 2-6, 6-3 triumph over Blackwood in the other singles clash.

However, the Blackwood-Rose doubles combination proved too strong and prevailed over the Crook Fitanza team 6-3, 6-0.

Against Puerto Rico, Rose defeated Nicole Vega 6-2, 6-0 in singles action, but Monica Matias bettered Blackwood 6-3, 6-4, and in the decisive doubles match Matias and Vega registered a close 4-6, 6-3, 6-4 triumph over Blackwood and Rose in an exciting encounter.

Meanwhile, the Jamaica boys team was placed in the tough Group Three, with third-seeded Costa Rica, The Bahamas, who were seeded sixth, and Puerto Rico.

Though competitive, the Jamaicans went down by a narrow 2-1 margin to both Costa Rica and The Bahamas.

In the play-offs for ninth to 15th positions, the Jamaicans defeated Barbados 2-0 and Bermuda 2-1 to clinch ninth spot. Against Barbados, Nicholas Chung defeated Matthew Hutchinson 6-3, 6-7, 6-4, and Rowland Phillips, who was in fine form throughout the week as he was undefeated in singles play, defeated Ture Skinner 6-4, 6-4. With the tie already decided, no doubles match was necessary.

Against Bermuda, Phillips beat Jack Keys 7-5, 6-2 in the opening singles, but his teammate, Daniel Harris, fell to Kieran Joynes 6-4, 6-3.

However, in the deciding doubles encounter, Phillips and Harris turned back the Joynes Rego combination 6-4, 6-2.