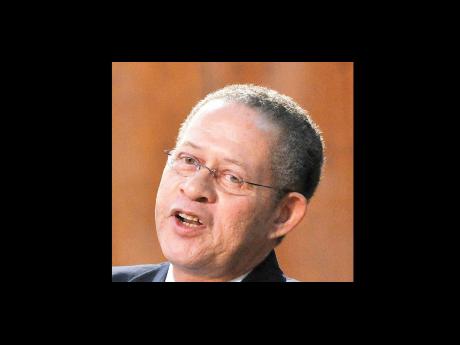 Prime Minister Bruce Golding ... announced the decision to unify retirement age at 65 for men and women in Parliament Tuesday.

Prime Minister Bruce Golding announced plans on Tuesday to unify the gender eligibility age of NIS pensioners, a policy shift that effectively raises the retirement age for women in one-year increments up to 2015.

The National Insurance Scheme provides for a pension eligibility age of 60 years for women and 65 years for men, but starting in 2011, the eligibility age for women will rise by one year per annum until it reaches 65, Golding said during his Budget presentation.

Further details on this and other revisions were outlined in Ministry Paper 41, titled 'Reforms to the National Insurance Scheme (NIS)' tabled the same day in the House of Representatives by Minister of Labour and Social Security Pearnel Charles.

Neither Jamaica's labour unions nor the political Opposition knew of the changes, according to checks by the Financial Gleaner.

Wayne Jones, general Secretary of the Joint Confederation of Trade Unions said he had no knowledge of any discussions taking place with unions on the matter, while Jamaica's financing partners, the multilateral agencies, said the NIS was not on the front burner in discussions on the country's economic programmes.

The Opposition People's National Party said preliminary discussions were held with the PM and government officials on the status of the NIS, but that no decisions were agreed with regard to changes to the pension scheme.

According to the ministry paper, the Statistical Institute of Jamaica has estimated that Jamaica's current population of older persons, 60 years and over, represent around 298,000 or 11 per cent of total population.

Life expectancy at age 60 is 19 years for males and 22 years for females.

The Economic Commission for Latin America and the Caribbean further projects that by 2025 the number of persons 60 years and older will increase to approximately 472,000, or about 14.5 per cent of total population.

The ministry paper states that in light of these statistics, and based on a recent actuarial evaluation, the Government was impelled to undertake a series of proposed reforms to the NIS in order to ensure the long-term viability and sustainability of the scheme.

In addition to the unification of the retirement ages for men and women, the Government has also increased the insurance wage ceiling (IWC) from J$500,000 to J$1 million per annum with effect from May 31, 2010.

The ceiling was last increased in 2003.

The Government has also stated its intention to increase the flat rate contribution made by domestic workers, voluntary contributors and self-employed persons from $20 to $50 per week with effect from May 31, 2010.

The method of contribution for members of parliament and members of the Jamaica Defence Force will also be adjusted effective May 31, where instead of contributing at the flat rate of $20 per week they will now contribute to the scheme at the same rate as other employed persons - that is 2.5 per cent of salary up to the insurance wage ceiling of $1 million per annum, matched by the employer.

Qualification for NIS benefits remains unchanged and is determined by the number of contributions made to the scheme. In order to qualify for a pension, the retiree has to make a minimum average of 10 weekly contributions per year during the period of insurability.

Effective July 1, pension benefits will increase by 20 per cent; the rates for maternity, employment injury, funeral grants, old age and invalidity grants, widows and orphan grants, and other allowances will increase by 11-33 per cent across categories; and benefits under the NI Gold programme covering prescription drugs, diagnostic procedures, and dental and optical services will be increased by 25-50 per cent.

The last adjustment was made in April 2008 when benefits were increased by 33.33 per cent.

The ministry paper also provides a summary of projected income and expenditure of the NIF on an annual basis for 35 years.

The estimate of the fund's annual closing balance is based on a "conservative" annual growth rate of 12.9 per cent.

But the ministry paper makes no attempt to indicate what percentage of women would be impacted by the decision to increase the pension age of eligibility from 60 to 65 years.