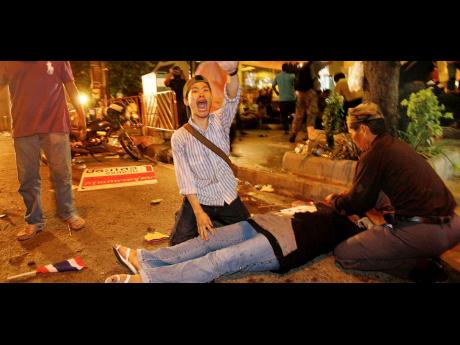 A Thai woman lies injured on the ground after the explosions. - AP Photo

At least five grenades exploded yesterday in the centre of Bangkok near a massive encampment of anti-government protesters, killing one person and wounding at least 70, sending panicked people running through the streets and fleeing an elevated train station.

The area of the explosions has been the site of a tense standoff, over the last several days, between Red Shirt protesters, who are demanding that Prime Minister Abhisit Vejjajiva resign, and armed troops .

More recently, a rival group of protesters has rallied in the area, occasionally hurling stones and insults at the Red Shirts, creating a volatile mix. Several of the blasts were near the area where the rivals have gathered, under the elevated tracks of a Skytrain station.

Army spokesman Colonel Sansern Kaewkamnerd said five M-79 grenades were fired from grenade launchers. Three fell through the roof of the station, which runs above Silom Road, the centre of Bangkok's business district. A fourth exploded on the pavement near the five-star Dusit Thani Hotel and the fifth near a bank, he said.

TV stations reported several more blasts. Previously, explosions at the site have been from fireworks.

The government's Erawan emergency centre said the blasts killed one person, identified as a Thai woman, and wounded at least 70.

The TPBS television network reported three foreigners were among the wounded. Associated Press reporters saw at least four people injured, two with serious wounds who were not moving.

The streets were full of people tending to the injured and carrying away bloodied people.

The Red Shirts, who believe Abhisit came to power illegitimately and are pushing for him to call elections immediately, have rallied in the streets for several weeks. Yesterday the army warned that time was running out for the protesters to clear the streets, saying soldiers would crack down soon.