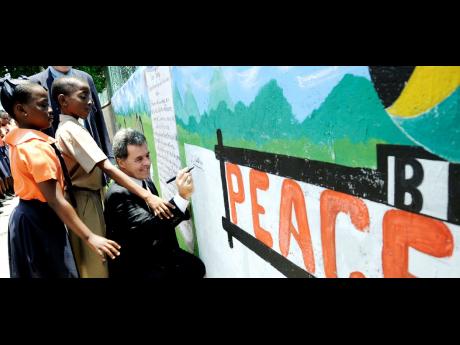 An effort is under way at the Denham Town Primary School to transform how children view their roles in making Jamaica a better society. This drive is being done by Beacons of Progress and Achievement (BPA), a non-governmental group, which launched its school peace initiative at Denham Town Primary yesterday on the school grounds in west Kingston.

The youth-led organisation provides leadership to other young people and tries to get them to help others build self-esteem and self-awareness.

Canadian high commissioner to Jamaica, Stephen Hallihan, whose commission sponsors the programme, described it as turning children into teachers and leaders. He said the programme provided an opportunity for children to give back to their communities and make a difference.

"There is an Irish proverb, and that proverb says that our children are today's blessing and they are tomorrow's promise," he said.

Grade-six student Javaugn Williams, who gave a testimonial, said that seeing his friends in other areas and having his own freedom were things, he cherished. He says BPA taught him how to achieve this.

"BPA teaches me that peace is an end to violence, peace is living in unity with each other, peace is being able to take responsibility for my own actions, especially when I am wrong. To aspire and to contribute to my home, school and community by being actively involved. As we learn in the BPA, we can be the change we wish to see in the world," he said.

Warren Newby, parliamentary secretary in the Ministry of Youth, Culture and Sports, praised the programme and said that it was in sync with the Government's thrust to culture in young people, the values that will advance the ability of Jamaica to become a First-World country in 20 years.