No funds for stadium renovation 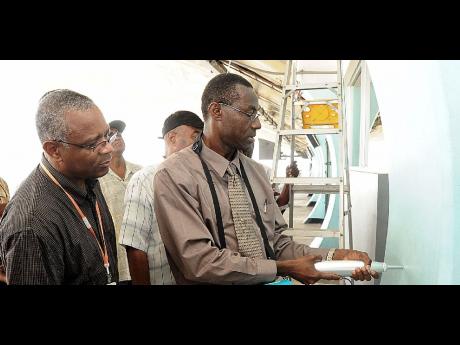 An inspection of the National Stadium yesterday highlighted several obvious defects that could "weaken the structure" but the company that manages the facility disclosed immediately that it had no money to make the corrections.

"The bottom line is we have no money for any capital improve-ment," said Major Desmon Brown, general manager of Independence Park Limited (IPL).

"The money that we have can barely meet our operating expenses," he added.

Brown made the comments even as City Engineer Norman Shand, who led the inspection, pointed journalists to cracks, exposed corroded steel and exposed electrical wires throughout the 48-year-old facility, mainly in the grandstand.

Shand made it clear that the structure of the stadium was safe, but said the cracks and corrosions pointed to leaks in the cantilevered beams that cover the grandstand.

"With the water catching the steelwork, (for it to be corroded) it loses its tensile strength and that will help weaken the structure," he explained.

Deputy Mayor Lee Clarke said the Kingston and St Andrew Corporation (KSAC) would study all the reports from agencies involved in the inspection before deciding on the priority areas and the necessary follow-up action.

All of this comes days before the May 1 staging of the seventh annual Jamaica International Invitational track meet which will feature American stars like Carmelita Jeter, Kerron Clement, Wallace Spearmon and Sanya Richards, along with Jamaica's double world-record holder Usain Bolt and Veronica Campbell-Brown.

Reiterating that the stadium was becoming obsolete, the IPL boss said this was an opportunity to look towards constructing a modern facility.

For example, he pointed out that if there were an accident in the bleachers section, "we either have to cross the field or go outside".

The National Stadium underwent major renovation in 2002 when US$30 million was spent to give it a facelift ahead of the World Junior Championships.

Dr Herb Elliott, who represented the Public Health Department, also pointed out that the absence of food handler's permits was another major problem at the stadium.

He disclosed that several cases were discovered during the recently concluded Boys and Girls' Athletics Championships and warned that the department would be shutting down concession stands where operators could not produce permits.