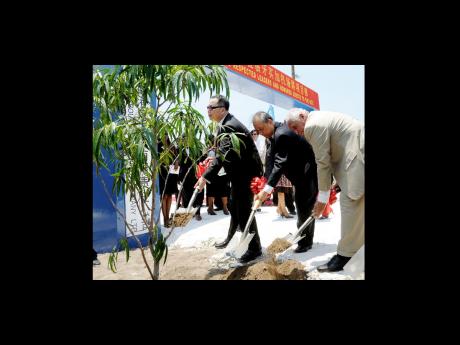 The Palisadoes Shoreline Protection and Rehabilitation Works project was launched yesterday and is slated for completion in two years. At a cost of US$65.4 million, 85 per cent of that amount is provided by China Exim Bank, while the Jamaican Government is paying the remainder.

The road network, which stretches from the Harbour View roundabout to NMIA and beyond to Port Royal, has been inundated with heaps of sand, boulders and water for days after taking a battering during the passage of Hurricane Ivan in September 2004, and Dean in August 2007.

Revetment work to correct the problems began under the former People's National Party administration and was financed by the Canadian Development Bank at a cost of $25 million, which followed studies conducted by Cuban and Canadian experts.

"We decided that that was a limited intervention and, therefore, moved in 2008 to do a careful and comprehensive analysis of the design to correct the damage done to the peninsula and rehabilitate the area," Minister of Transport and Works Mike Henry said in his address at the launch.

The project is situated in the constituencies of East Rural St Andrew and East Kingston, from which the majority of the labour force is expected.