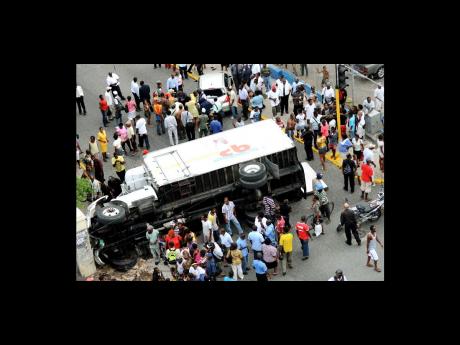 An aerial view of the accident with a Caribbean Broilers chicken truck and a Nissan Tiida motor car at the intersection of North and East streets on Monday. Pedestrian Iroy Johnson was also hit during the collision. - Ricardo Makyn/Staff Photographer

Ransford Wright, president of the Jamaica Council for Persons with Disabilities, has described Iroy Johnson as friendly, jovial and talkative.

Johnson is the pedestrian who was injured in an accident involving a Caribbean Broilers truck and a car at the intersection of North and East streets on Monday.

Based on a camera which caught the incident, the accident occurred when a truck driver, in her attempt to avoid plowing into a Nissan Tiida motor car, swerved just after going through the lights at the intersection. There was still contact between the two vehicles and the truck veered towards the sidewalk on the south-east corner of the intersection. Johnson was standing, waiting to cross. The truck hit Johnson and a light pole before turning on to its side.

"If he had his full sight, maybe he would have been missed," Wright lamented.

Johnson is in his second year at the HEART Vocational Training Development Institute, working towards his Bachelor of Science degree in information and com-munication technology.

According to Wright, Johnson qualified for partial funding, the Margaret Moody Scholarship valued at $125,000, which covers his tuition.

"(Johnson) is one of our clients who has an interest in improving himself," Wright said.

However, the friendly and jovial man is not only a scholar. He plays international cricket too.

The sportsman began repre-senting Jamaica's visually impaired cricket team and has also gone on to play for the West Indies as a batsman. In fact, Johnson was on the team that won the first-ever West Indies blind Cricket tournament in 2006. In the final, Johnson scored an unbeaten half-century to defeat hosts Barbados for the title.

Johnson is recovering at the Kingston Public Hospital.