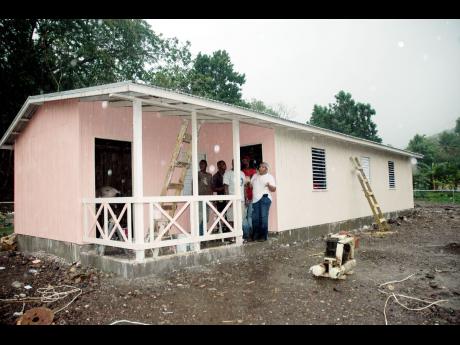 Scotia Volunteers from Jamaica and Toronto constructed this new school - Alexandria Hope Basic School, which will now house children from two previous schools which were operating in very dilapidated conditions. The volunteers worked with Food For the Poor Jamaica to build the school and a home for the principals to the tune of $2.5 million in a one-day outreach programme in New Ground Clarendon. - Contributed Photo

For 50 small children at the Alexandria and Hope basic schools in New Ground, Clarendon going to school is an exciting adventure, as with all children their age.

They are oblivious to the fact that it is a cellar in the principal's home and a changing room in the community centre that is "school".

Teachers and students in the changing room deal with a leaking roof, no windows, no doors and rough concrete floors which left the children with several bruises when they fall. Meanwhile the students who attend "school" in the cellar of principal's home are in a structure that's not very sturdy, limited in space, and without proper sanitary convenience. This is all because both schools lost their original structures to Hurricane Ivan back in 2004. Despite six years passing, the students are still without a schoolhouse and the teachers of the school are trying to make do ... until now

The Scotia Volunteers from the Corporate and Commercial Banking Centre in Jamaica heard of their plight and decided to make an intervention. The volunteers in Jamaica and their colleagues in Toronto partnered to fund the purchase and construction of a brand new school house which will contain a classroom, principal office, bathrooms and kitchen facilities.

Responding to the news about the new school, Nardia Graham, principal for Alexandria Basic said "we are really excited about getting our new schoolhouse as we will be able to do a lot of things to improve the quality of education and care the students get at school. We will be better able to instruct them as we have better facilities and more space to layout our classroom and conduct interactive activities. The outdoors will also be safer as with the new fenced area we can monitor them more effectively."

But Scotiabank did not just 'sponsor' the process and stand back. Eighty Scotiabank volunteers and a team from Food For the Poor Jamaica constructed the school on Saturday, April 15 in New Ground.

Debbie Clue, manager of corporate and social responsibility in Jamaica, said: "When we decided to pool resources with our colleagues in Toronto to build the school we also knew that we wanted to be on the ground in New Ground. We wanted the change to come from our own hands because we were so moved by the desperation."

Clue added that this hands-on approach was also in keeping with the volunteers' usual practice of getting involved in their outreach projects.

Over the past three years, the Scotia Volunteers have constructed three homes, two in Portland and one in Montego Bay with a similar one day 'all hands on deck' construction model. The Food for the Poor team has already laid the foundation and conducted important electrical and plumbing in preparation for the work day. The team is aiming to complete the major part of the construction process and install fencing in addition to landscaping and planting of a vegetable garden for the school.

Clue said "it was particularly important for us to do a fulsome transformation by landscaping the school and creating a beautiful secured space for the children and teachers. The vegetable garden is our way to giving them a gift which keeps on giving as this garden will produce vegetable and other small produce which the administration can use in preparing meals for the children."

Several other organisations are partnering with the Scotia Volunteer team in constructing the school. Along with Food for the Poor's significant contribution, Courts Jamaica has also pitched in to make the project possible.

"We couldn't have done this alone, and we are grateful for the partnership with Food for the Poor which has made an almost equal contribution to that of Scotiabank. Courts has also kindly provided us with a cash donation along with the provision of a fridge and stove for the school. Several other organisations have made contributions to make the workday possible and we are extremely happy to partner with the groups as we strive for an integrated approach in all we do."

The Scotia Volunteers will be formally opening the school in May 2010 with a small ceremony after all 'finishing' work has been completed.