Jamaican girls on the double 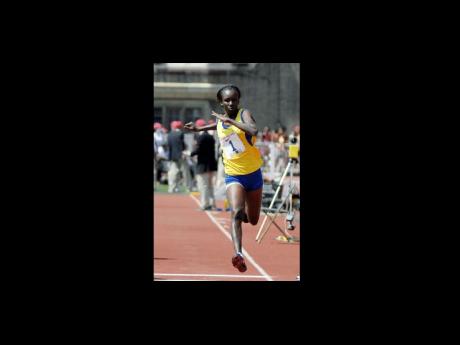 St Elizabeth Technical's Rochelle Farquharson competing in the high school girls triple jump on the opening day of the 2010 Penn Relays yesterday. Farquharson won the event with a best leap of 12.56 metres. - Contributed

Competing in her first-ever Penn Relays, long jumper Porter continued her unbeaten run this season by posting an impressive 6.12 metres for gold.

"I am very pleased with my win and I feel great as it is the first time I am competing at the Penn Relays," said Porter. Jamaican athletes swept the top three positions as Camperdown's Nickeava Wilson (5.80m) and Holmwood Technical Nickeisha Beaumont (5.77m) finished second and third, respectively.

Farquharson repeated her 2009 win in the triple jump with a best leap of 12.56m.

She was happy for the victory but revealed that she competed in some discomfort.

"I have an ankle injury and it affected my performance," said Farquharson.

In the morning session, Edwin Allen High's Ristananna Tracy was second in the 400 metres hurdles, clocking 59.42 seconds behind winner Leah Nugent of Abington in Pennsylvania, 59.15.

Edwin Allen were the top Jamaican school as they had the fastest qualifying times in both the sprint relay and the 4x800.

New champions will be crowned in the 4x100m as defending champions Vere Technical dropped the baton on the first hand off. Edwin Allen won their heat in 46.21 to lead four other Jamaican teams into today's Championships of America final. The Queen's School (46.31), Holmwood (46.34), Herbert Morrison (46.69) and Manchester High (46.95) in the final.

Before this final, Camperdown High (47.66) and St Jago High (47.91) will compete in the consolation final for small schools.

Four Jamaican teams will run off in today's 4x400m final where a battle royal is looming with the Americans, as Benjamin Cordoza out of Oakland Gardens, New York, are the fastest qualifiers with 3:41.62. Holmwood, who are expected to bring in top runner Chris-Ann Gordon in the final, are the next best qualifiers with 3:42.96. Edwin Allen, 3:43.00, Manchester High, 3:43.00, and Vere Technical with 3:43.74 are the other Jamaican teams to advance.

The boys will bow into action this morning with the first event being the 4x800m. Holmwood Technical, Jamaica College and favourites Kingston College are the Jamaican teams down to compete.