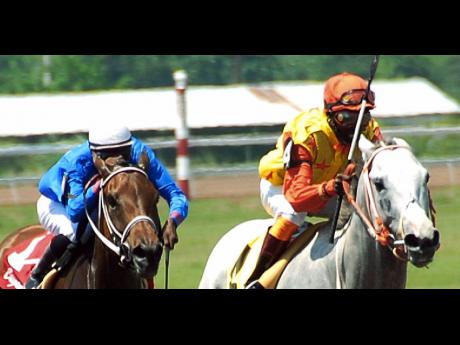 Tomorrow's Pick-Nine will be highlighted by the 71st running of the Bigga Jamaica Oaks for native-bred three-year-old fillies over 2000 metres at Caymanas Park.

This is listed as the 10th and penultimate race on the well-supported 'Ladies Day' programme, which also features the Lady Geeta Trophy (grade one) over 1200 metres to be contested by six top-class horses, and the divided Ricochet Trophy over the round-five course for native-bred three-year-old fillies.

Meanwhile, the Pick-9 had no takers on Wednesday and the carryover to tomorrow stands at $1.29 million. Despite a 32-1 upset by newcomer MICHIEPOOH, the Super-6 was caught by one lucky punter, who bagged a whopping $1.8 million.

The Pick-9 will embrace races three to 11, the Super-6 from race six to 11. We look at the Super-6 which gets under way with Division I of the Ricochet Trophy, to be contested by 13 starters.

The horses to note are EVER BLESSED, CLASSICAL BABE and SHE'S SO SWEET, all of whom ran well when sprinting last time out.

There is also the well-forward debutante ADANNA, who has shown good speed at exercise and is coming to run. The Anthony Nunes-trained EVER BLESSED ran well (made most) for a long way behind TOPLESS ANGEL over 1400 metres recently and, with the trip now ideal, gets the nod over ADANNA, a bay filly by Royal Minister out of Melody's Slasher from the stables of Norman Palmer.

GIRLOFMYDREAMS, having won two of her last three races, should rebound at the expense of LUCKY EDDIE and RAJPUT in the seventh race over 1600 metres.

The five-year-old mare, who hails from the in-form stables of Ryan Darby, is coming off a recent win over 1300 metres on a $350,000 claiming tag, and returning on same, is preferred to LUCKY EDDIE.

TREND SETTER, who is owned and bred by former West Indies fast bowler Courtney Walsh, was an unlucky loser in a three-way photo finish recently and this lightly raced 3-y-o filly (Aaron Chatrie up) should rebound in the eighth race, Division II of the Ricochet Trophy.

The ninth race over the straight for maiden four-year-olds and up should resolve itself into a straight fight between SEA TRAVELLER and DE-BACHELOR, both of whom ran well in defeat over the course last time out. Preference is for the more experienced DE-BACHELOR, the mount of Dane Nelson.

I also like the recent 1000 Guineas winner AL FOUZIA to get the better of GABIWITZO once again in the Bigga Oaks, to be contested by 13 fillies over 2000 metres. And in the nightpan, the bold front runner DIABOLICAL KID to stave off the late- kicking pair of GO MY ROBIN and PRIME MINISTER over 1500 metres.