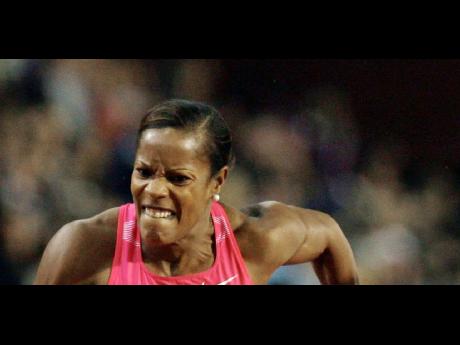 World 100 metres hurdles champion Brigitte Foster-Hylton could be out of action for up to a year, after a recently done MRI scan revealed serious damage to the 35-year-old's left hamstring.

Foster-Hylton suffered the injury while competing in the 100m at last weekend's University of Technology Track and Field Classic at the National Stadium.

The MVP Track Club athlete, who is scheduled to undergo surgery on Monday, pulled up close to the 70m mark and fell heavily on the track before receiving medical attention at the venue.

This latest setback has left a cloud of uncertainty around the MVP standout, and there are now concerns that she may decide to once again pull down the curtain on her career, after a similar move in 2008 following the Beijing Olympic Games.

Foster-Hylton has, however, ruled out retirement and is confident that she can once again bounce back from this latest injury.

Responding to questions by The Gleaner, Foster-Hylton, who is now resting in Miami, confirmed the unfortunate setback.

"The MRI showed that my left hamstring is off the tendon by three centimetres. (I'm) scheduled for surgery on Monday, (I) will be out for a year," said Foster-Hylton late last night.

"I had a similar surgery done on my right hamstring two years ago before the Beijing Olympics and I did fairly well there. Last year, it was back to full strength and I had a super year," said a defiant Foster-Hylton. "I'm confident that I will recover and be back to top form.

"Recovery will be easier this time around because we dealt with it early," Foster-Hylton added.

Meanwhile, MVP president Bruce James was cagey when quizzed about the state of his charge. He was, however, quick to point out that the management's main priority at this point was to ensure the athlete's recovery.