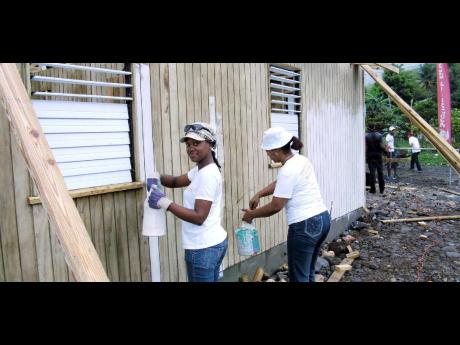 Bank of Nova Scotia employees assist with the painting of the Alexandria Hope Basic School on Saturday. - Photo by George Henry

Students, teachers and members of the New Ground community in northcentral Clarendon now have a new basic school in their area.

The school was constructed last Saturday by representatives from the Bank of Nova Scotia, Canada, Jamaica, Trinidad, Panama and a number of other branches around the Caribbean. Food For The Poor was there to chip in, along with scores of residents.

Debbie Clue, manager of corporate and social responsibility at Scotiabank, Jamaica, told The Gleaner the school's construction came about after it was brought to the bank's attention that almost 50 students at two basic schools - the Alexandria and the Hope Basic schools which were on separate premises at New Ground - were having classes in the cellar of a principal's house and in the changing room of the community centre, after their roofs were badly damaged by Hurricane Ivan in 2004.

Six years without a good classroom

"Teachers and students in the changing room had to put up with a leaking roof, there were no windows, no doors and there was a rough concrete floor which left the children with several bruises when they fell," said Clue, who added that six years had passed and students and their teachers were still without a good classroom.

She stated that when Scotiabank's volunteers from the Corporate and Commercial Banking Centre in Jamaica heard of the plight, they decided to intervene, and volunteers in Jamaica and Toronto decided to partner and fund the construction of the new facilities, with assistance from residents and Food For The Poor.

The new school, which is now named the Alexandria Hope Basic School, boasts a large classroom to accommodate 50 students, a kitchen, and bathroom facilities for teachers and students. The large group of volunteers also had a cottage constructed for the school's principal, established a vegetable garden and installed perimeter fencing.