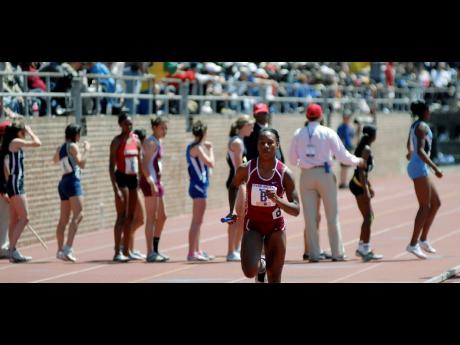 Holmwood Technical's Chris-ann Gordon runs away from her opponents awaiting the baton during the high school girls' 4x800m relay at the Penn Relays, University of Pennsylvania, yesterday. - Contributed

AFTER failing to win a single event last year, the Maurice Wilson-coached Holmwood Technical girls set the University of Pennsylvania track on fire yesterday as they finished with a perfect relay record at the meet, capturing the 4x100, 4x400 and 4x800 metres events.

The Holmwood Technical train started rolling in the first final involving high school teams - the 4x800 metres - as they upset defending champions and favourites, Edwin Allen, on the way to a convincing win.

After playing second-fiddle all season to Edwin Allen, Holmwood, led by a brilliant second leg by Petrine Plummer, clocked 2:08.79.

Ristananna Tracey ran an excellent anchor leg for Edwin Allen, clocking 2:06.72, but she was left with too much to do, as Chris-ann Gordon piloted Holmwood to victory in 8:42.49. The other members of the winning Holmwood team were Lovan Palmer and Monique Thompson.

The quartet of Sherica Moulton, Kadesha Dallas, Yanique Ellington and Diana Johnson on anchor, then made it two from two for Holmwood in the 4x100 as they won in 45.41 seconds. Despite running without one of their top athletes - Remona Burchell, who did not get her visa - Herbert Morrison Technical finished a creditable second in 45.81 seconds. Edwin Allen (45.87) and The Queen's School (45.99) ended third and fourth, respectively, while Manchester High finished seventh in 46.79.

In the consolation final for 'small' schools, Camperdown clocked 47.03 seconds for third, while St Jago were fourth in 47.26 seconds.

Holmwood closed the day in fine style, as, despite a good challenge from defending champions Edwin Allen, they could not prevent the Christiana-based school from completing the treble as Chris-ann Gordon, with a brilliant anchor leg of 52.79, piloted her team to victory once again. The other members of the winning team were Allison Daley, Jeneive Russell and Petra Fanty.

Wilson was very pleased with his team's success.

"I am extremely happy for the wins as last year we came to the meet and failed to win an event. We were motivated by that so we put in some good work after Champs and were very determined to make up for last year's failures," said Wilson.

There were two other success for Jamaican schools yesterday, as Candicea Bernard of St Hugh's and Kemoy Campbell of Bellefield continued their excellent form this season with individual wins.

Campbell had Jamaica first-ever success in the high school boys 3000 metres when he clocked 8:20.14 for the win, the fourth-fastest time ever in the event.