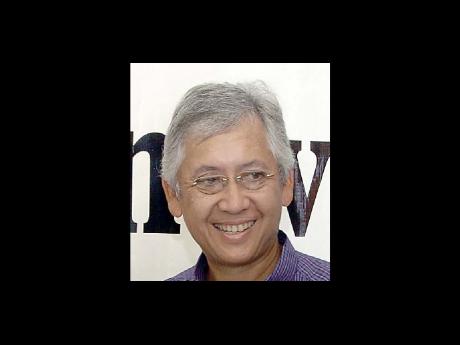 Among the large turnout of bridge players at the Liguanea Club on Sunday to compete in the special two-session tournament for the Pascal Wong Ken Trophy were persons not seen on the circuit for years.

Fittingly, the winning pair came from that category, as the father-son pair of Tony and Iain Roberts (58.33 per cent) came from fourth place after the first session to catch and beat the halfway leaders Peter Mais (another prodigal son and former national representative) and Richard Phillips (57.50 per cent) into second. It was a family affair all around as the husband-wife pair of Dr Michael and Carol Coore (57.29 per cent) finished third.

In the regular weekly tournaments, Monica Cools-Lartigue and Marlene Fulford (59.03 per cent) won on Monday night from Ripton Savin-Balmain Brown (57.64 per cent) second and Winston Chin-You-Audley Astwood (54.86 per cent) third. On Wednesday night, Dr Coore teamed with golfer Wayne Chai Chong to win comfortably, posting an above-average score of 61.11 per cent. Monday's winners Fulford and Cools-Lartigue (56.94 per cent) were second and the ever-consistent pair of Winston Chin You-Audley Astwood (55.56 per cent) third.

Zone Two teams, Old Harbour New Testament and Miracle Open Bible, will clash in the Power of Faith Twenty/20 Church Cricket League this morning at the Lime Tree Oval in St Catherine, match time 11 o'clock. Both games, which were scheduled for last Saturday, were washed out and are rescheduled for Labour Day, Monday, May 24.

The league, which is in its fourth year, is not just about playing the sport of cricket but to bring souls to the Kingdom of God. At least five players from the starting XI must be Christians and the captain of the team must be a saved soul. The teams are encouraged to fellowship before and after matches.

Portmore Under-15 League kicks off

The Senator Arthur Williams-sponsored Portmore Under-15 Football League kicks off this afternoon with a uniform parade and a double-header at the Passagefort playing field. The uniform parade begins at noon, with the eight participating teams meeting the sponsors and officials of the Portmore League. Defending champions Cumberland kick off the season with a game against Passagefort United at 1 p.m., while at 3 p.m. newcomers Portmore United take on Watson Grove.

Portsmouth's Class One girl, Okhalia Buchanan, who completed the 100m (12.5 seconds) and the 200m (27.3 seconds) sprint double, was the most outstanding female athlete at the meet, while Demayo Easy of Friendship Primary, a Class One boy, took the sprint double in 12.4 seconds and 26.5. He was the most outstanding male athlete. Another performance of note was from Jericho's Keyshan Davis, who took the Class Three boys sprint double (100m 13.6 seconds, and 150m in 21.2 seconds).

Do or die for Waterford

Waterford FC will have it all to play for when they oppose Royal Lakes in the second-leg semi-final in the St Catherine Division One football league at the Prison Oval today, match time 3 p.m. Royal Lakes took the first leg 1-0 through a Royan Watson goal.

On Thursday, McCook's Pen sent Portmore's Wanderers packing from the league after a come-from-behind 2-1 victory in the second-leg match at the Prison Oval to advance 3-2 on aggregate. Dowell Brown and Damion Wellington got McCook's Pen's goals, while Andrew Richards netted for Wanderers. The teams played to a 1-1 deadlock in the first leg.

The Portmore domino league was formed by businessman Noel Brown in 1985 and has been going strong ever since. It's first president was Gerald Stephens, who served for one term before stepping down to become the public relations officer and treasurer.

Stephens was re-elected president in 1997 and has held the post since. Prior to his coming back, however, a number of persons have served as president - Felix Frew, Ronald Dunkley and Gerald Green.

Colours lose at last in domino

Colours ended their preliminary fixture on top with 69 points from 18 matches and will contest the quarter-finals on Sunday, May 9.Lime Tree have also advanced to the quarter-finals, along with Ken's Wildflower and Black Rooster. They will be joined by first-time entrants Caymanas Track Domino Club, who clipped Marlie Mount 300-298 in an exciting countdown at Marlie Mount.

In Division One, leaders Eagle View defeated Masterpiece 300-290 in a home match at Old Braeton, defending champions Fort International clipped Ackee Pod 300-294 in an away match in Spanish Town, North Street United stopped home team Hurricane 300-290 at Dunbeholden and Village Link beat Prozz and Conzz 300-292 at Garveymeade Sports Club, while the match between home team Eradication and ISCF at Gregory Park ended prematurely due to a power outage. ISCF were leading 191-184 at that stage. The match between Caribbean Classic and home team Right Stuff was not played.

Leaders Eastern All-Stars will take on Eagles in a Division One top-of-the-table clash at Hughenden Plaza tomorrow in the Pattex Cup skittles competition, which marks its final matches in the preliminary round.

This match starts at 4:30 p.m. and will be preceded by another top-of-the-table clash between Division Two leaders Mister C and House of Peace starting at 1 p.m.

In other matches, Portmore-based Meadowvale will oppose Mystix at Meadowvale, while Waltham Strikers take on The Dip and home team Willies Strikers oppose Mercury, both at Willies, Three Miles. In a rescheduled match on Wednesday night, Starliner defeated Eagles 7-4 at Meadowvale.

Meanwhile, eight players have advanced to the quarter-final round of the Sistas singles championship following wins at Mystix Sports Bar last Saturday night.