Literary Arts - Against the tide 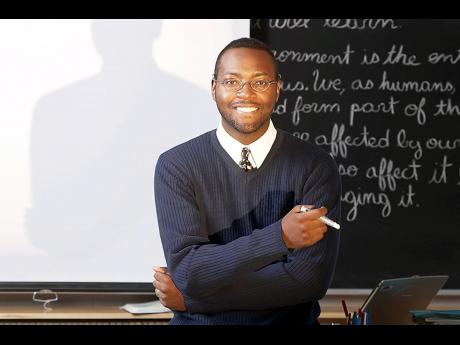 Karen and Elise found me in the library one Tuesday afternoon. I was sitting in the back on the dusty floor, reading Jane Austen in the 'dim-greenish' light shed by the fluorescent bulb. Their faces were eager yet apprehensive, their eyes bright and feverish.

I looked up at them, my eyes squinting in the dark room. Elise burst out first: "We saw Mikey's car!"

Karen gave her a sharp look. "What she means to say is, we need to tell you something. Something ... possibly ... upsetting."

I stared at them. "What you mean you saw his car?" Mikey, my fiancé, was supposed to be in Ocho Rios for a Future Surgeons conference for the next four days.

"Maybe you should sit down," Elise said breathlessly.

"I am sitting down," I said, irritation and fear creeping into my voice. "Hurry up and say what you saying."

It had been a rough year. I would be completing my degree in international relations in just a few days, a major that despite my perfect grades I cared very little about. I had two more exams to do and was so tired of studying and reviewing and rereading that I kept escaping to the back of the large campus library to read books like Pride and Prejudice and Northanger Abbey, and lose myself in the world of hapless English romance. My own romantic life was stressing me out as well. My boyfriend of five years, with the help and encouragement of our parents, had harangued me until I finally agreed to get married. Nothing like the daughter of a famous politician and physician on your arm.

The only person I felt comfortable talking to about all of this was James, known to most of my friends as Mr Hanson. He was a lecturer in the history department, six years my senior, smart, inspiring, and drop-dead gorgeous. Most students skipped lectures, but his classes were always full, the room teeming with admiring females, some of whom were not even taking history but just wanted something pretty to stare at for an hour. He had a husky and captivating voice, and when he walked from one side of the room to the other, every pair of eyes followed him.

I should know because I used to be one of those panting females. I signed up for extra study sessions, never missed a lecture and always tried to find an excuse to stop and speak to him whenever we bumped into each other. And I might have been wrong, but some small part of me felt that James had some feelings for me too. His eyes always seemed to linger on me at the end of the class when it was time to leave. But then Mikey started insisting on waiting outside for me after each lecture, leaning his tall frame against the doorway, throwing an arm over my shoulder possessively as soon as I stepped out. The meaningful looks stopped and James began to treat me like every other student, but I still felt closer to him than anyone else. When I was too afraid to rail against my parents for the constant demands of me, I could always go to him. He was good at listening, a quality Mikey seemed to lack.

Mikey and I had gone through a short break back then, when I found out he was spending a little too much time with his ex-girlfriend, Sonya. I broke up with him and then spent a week trying to convince my mother and father that a cheating boyfriend could not be tolerated no matter who his parents were. Of course, I eventually folded like a deck of cards: my parents shouted, I relented, Mikey proposed, I accepted. Sonya disappeared into the background and everyone was happy. Except for me.

Karen continued, "As Elise said, we saw Mikey's car," she waited a beat, "parked outside Sonya Wallace's house. At 3 a.m. This morning."

There was a pregnant pause in the dusty hallway. Tiny specks of dust drifted in front of my eyes, caught in the slight draft coming through the metal louvres. Karen and Elise waited, watching my face carefully.

"Maybe he was just visiting her," Karen ventured in a soft voice.

I stood up slowly, leaving the books on the floor. "I going talk to you guys later."

They stared after me as I walked out of the library as quickly as I could. "But what about the wedding?" Elise shouted stupidly. I didn't reply. My mind was brimming with questions and not one of them had to do with my fiancé.

When I found myself outside of James' office, I stopped to take a deep breath. The door was open to allow the wind to blow in and a tiny little fan in the corner was working hard to cool down the room. James was sitting behind his desk, staring at a stack of essays, his top three buttons undone. He was tugging at the front of his shirt to stay cool, and I could see a hint of his bare chest. I swallowed hard and stepped inside.

He looked up when he saw me, his eyebrows lifting in surprise. "Giselle," he said, standing up.

I decided to speak before I lost all my nerve. "At the end of this week I won't be a student here anymore."

His eyes narrowed almost imperceptibly, but he said nothing.

I reached behind me and shut the door without turning around.

He opened his mouth to speak and then, seeming to think better of it, said nothing. Crossing his arms, he simply looked at me. My heart was racing a little now as I waited for him to say something.

He followed me through the door, locked his office, and took my hand. As we walked to his car, I smiled up at him and it felt like the first time.

I stepped closer to him and he held a hand up, stopping me in my tracks.

When he spoke, his voice was surprisingly gentle. "What about your fiancé?'

"He's out of the picture," I said. James rubbed his hands over his face and shifted his weight from one leg to the next. I realised with a start that he was nervous. I took a few more steps until I was standing with my face mere inches from his. When I put my hand on his shoulder, he didn't move away. Taking another deep breath, I gripped the front of his shirt and rose on my toes.

His eyes merely watched me, giving nothing away.

I slid my hands over his shoulders, linking my arms around his neck.

When I was so close that my lips brushed his, I felt a tremor go through him that echoed along my own spine. His mouth was warm and soft as I pressed my lips against it, but he still didn't move. I was beginning to back away when his hands gripped my hips suddenly, bringing me back on to my toes. And back against his lips.

Relief washed over me, followed by the strong undercurrent of desire that I had kept hidden away for so long. I felt no regret. This was what I had been longing for over the past three years. After all I had sacrificed for my boyfriend, my parents, I deserved to do something for myself, didn't I?

James was kissing me with fervour now, his hands moving up to grip my face tightly, pausing to run his thumb across my lips, and then kissing me even harder. Finally he stopped and just held me against him. He was only a couple of inches taller than me and our frames fit together completely.

After a long moment, he leaned back and looked around, as if he had forgotten where he was. "We can't do this here," he said.

I nodded, brushing my hair back from my face and trying to slow my breathing. "I know."

He stood for a moment, considering, and I prayed he wouldn't change his mind. Then he picked up his keys from the desk and held a hand out to me. "Let's go."

I began to smile, then my phone rang. I pulled it out of my back pocket and flipped it open, forgetting to check who was calling first.

He laughed. "Where else would I be?"

My phone gave a short beep and vibrated. "Hold on," I said in a dull voice and switched over to the other line.

It was Karen. "OK, ahmm interesting news. I think we might have been wrong about what we told you earlier."

A sinking feeling began to creep into my stomach.

"Same colour and everything!" Elise chirped in the background.

"So it look like it wasn't him," Karen continued. "So the wedding is back on, right? Nothing to worry about!"

James was looking at me, a mixture of concern and resignation on his face. Something shifted deep inside me. I closed the phone, disconnecting both calls and turned it off.

He followed me through the door, locked his office and took my hand. As we walked to his car, I smiled up at him and it felt like the first time.