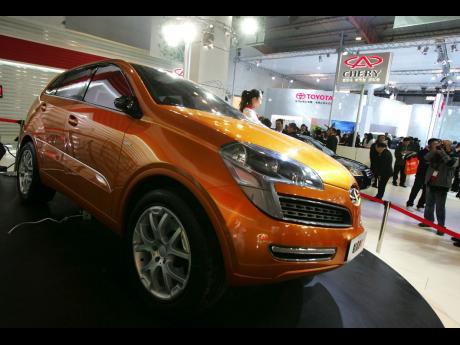 A model poses beside this Chery car at the Beijing Auto Show. - AP

The Beijing auto show has quickly become a key industry event as China's auto market powered past the United States (US) last year to become the world's biggest. The show opened to reporters on Friday and opens to the public on Tuesday.

Sales soared 45 per cent last year to 13.6 million vehicles while US sales slumped to 10.5 million. The industry has been boosted by China's economic rebound, which saw growth accelerate to 11.9 per cent in the first quarter of this year.

Chery gave no details of its deal with Messi, reigning FIFA Player of the Year and star for Spanish giants Barcelona. The company exports to 70 developing countries in Asia, the Middle East and Latin America, and hopes to double foreign sales to 100,000 this year.

"Through the voice and face of a world-famous ambassador like Messi, we hope to increase our visibility and people's knowledge of our brand," said Jin Yibo, a Chery spokesman.

Geely, little known abroad before it agreed in March to buy Volvo from Ford Motor Co for $1.8 billion, said it hopes to raise sales of its own brands from a projected 400,000 this year to up to two million by 2015, with as many as half sold in foreign markets.

Geely displayed 55 vehicles at the show, 11 of them new, including a plug-in electric model and five other alternative cars. A company vice-president, Zhao Fuquan, said it plans to sell some abroad, though he gave no details.

"Whoever is interested, we will sell the cars to them," Zhao said.

BYD, with backing from billionaire investor Warren Buffett, showed off its five-seat, all-electric e6, which it said it hopes to sell in the United States by year end.

"Consumers on the West Coast tend to be more accepting of alternative energy cars, so that's where we'd like to launch our e6 first," said BYD spokesman Paul Lin. "The car will be very affordable and we anticipate that it will be a good fit for the US, our most important export market."

BYD plans to test the e6 by using about 100 of them as taxis in the southern Chinese city of Shenzhen beginning in June, Lin said.

Chinese automakers have announced plans in the past to export to the United States or Europe but have yet to satisfy Western safety and environmental standards.

A lot of work to do

Unlike Japanese and Korean automakers that broke into foreign markets earlier, Chinese manufacturers lack a solid financial base at home because the fragmented market is dominated by foreign brands.

"Even in developing countries, Chinese automakers still have a lot to do to know the local market, to improve quality," said John Zeng, an analyst for IHS Global Insight. "I think the top priority for most Chinese automakers is still to get the right market share in China, especially because this is the market that is growing fastest."

Global automakers are debuting 14 vehicles at the Beijing show in a reflection of China's status as a financial lifeline to an industry that is struggling in other markets.

GM says its China sales jumped 68 per cent in March from a year earlier and 2010 sales could top two million vehicles. That would nearly equal last year's sales of 2.1 million in the United States, though GM has to split China revenues with local partners.